This is an excellent wake up call: Portfolio manager

Elliott said the company should also look at selling its retail network of gasoline stations across Canada to unlock a higher share price. Suncor rose 12 per cent to $47.22 in Toronto, the highest level since October 2018.

The Calgary-based company is the worst-performing large oil producer in Canada since the beginning of 2021. Analysts have said the stock is being weighed down by a series of operational problems, including a fire that resulted in an injury at a refinery in March and fatal accidents in the last two years. Suncor also cut its production guidance at its Fort Hills oil sands mine in 2021 after finding slopes in the mine were not stable. 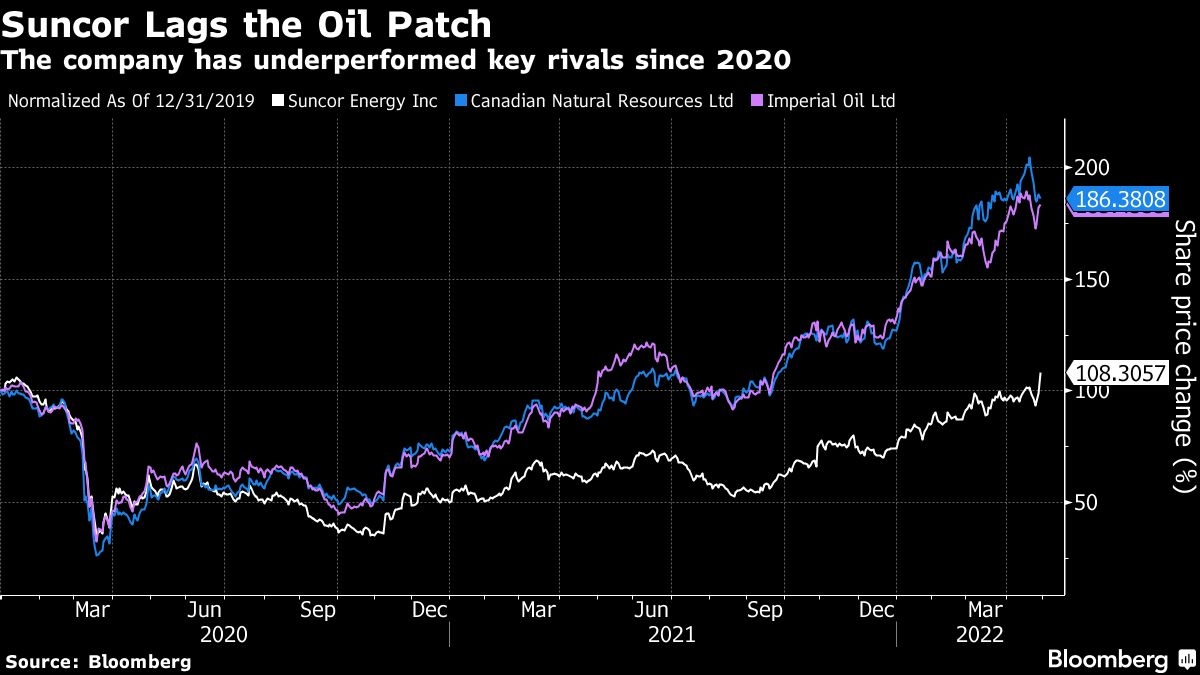 Elliott, which was founded by Paul Singer, hasn’t nominated directors for this year’s annual general meeting slated for May 10. The firm, which owns a 3.4 per cent economic stake in Suncor, could increase that stake or partner with other shareholders to call a special meeting if the company resists change, according to a person familiar with the matter.

The “full upside” of a restructuring plan would put Suncor’s share price at $68, an increase of more than 50 per cent from Wednesday’s close, the firm said in a presentation.

“Our investment in Suncor is underpinned by our conviction that, with the right leadership, the company can restore its prior success. Suncor’s integrated oil sands operations are a critical part of the global energy supply, and we believe these assets are dramatically undervalued,” the letter from Pike and Tomkins stated.

Suncor’s board and management team “appreciates the views of its shareholders and will take the time to carefully assess the recommendations and materials provided, with a view to enhancing shareholder and other stakeholder value,” the company said in an emailed statement. Suncor “looks forward to engaging with Elliott in due course to better understand their perspective” and remains confident in the current growth strategy, the statement said.

While the stock has returned 107 per cent since the beginning of last year, as of Wednesday’s close, those gains have been dwarfed by Canadian Natural Resources Ltd.’s 172 per cent in the same period. Cenovus Energy Inc. has returned more than 200 per cent and Imperial Oil Ltd. 168 per cent. The figures include dividends.

“Given how long the safety issues have been going on and the number of fatalities they’ve had, I think it’s fair criticism to say their eye has not been on the safety ball as much as it has,” Eric Nuttall, a senior portfolio manager at Ninepoint Partners, said on BNN Bloomberg Television.

Nuttall called Elliott “the real deal” and said its emergence on Suncor could lead to more activist and value investors looking at Canadian energy stocks.

Some investors think the problems at Suncor date back all the way to its acquisition of Petro-Canada in 2009.

“The acquisitions that they’ve made have consistently deteriorated the quality of the portfolio and I think it’s really interesting now that it’s coming back to roost,” said Ryan Bushell, president and portfolio manager at Newhaven Asset Management.