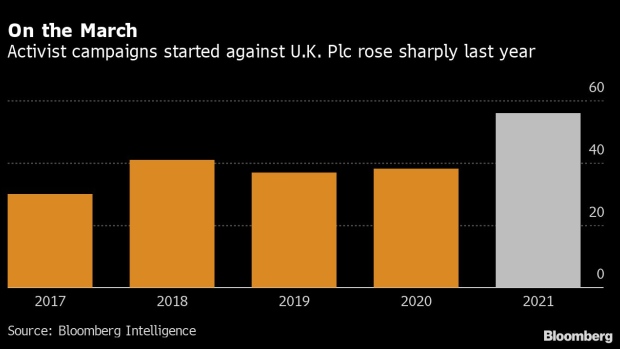 London-listed companies with a combined market capitalization of more than $500 billion have been targeted in the past few months, data compiled by Bloomberg show. The move from Nelson Peltz’s Trian Fund Management to amass a holding in Unilever, the maker of Dove soap, is putting more pressure on Chief Executive Officer Alan Jope to accelerate a revamp.

Drugmaker GlaxoSmithKline Plc and energy giant Shell Plc are also among the FTSE 100 constituents that have recently become targets. Last year was already a busy year for activist investors in the British market, with the number of campaigns rising 48% to the highest level in at least five years, according to Bloomberg Intelligence.

Impatient investors in British firms will increasingly want companies to deliver better returns on capital as interest rates rise, according to Malcolm McKenzie, head of European corporate transformation services at advisory firm Alvarez & Marsal. The U.K. will be a rich hunting ground for activists throughout 2022, he said.

“The relative underperformance of U.K. corporates compared to their European peers is helping drive more activism,” McKenzie said. “At the same time, environmental and social activism continues to build, bringing ever greater complexity to the challenges faced by corporates and their boards. Unravelling a Gordian knot of multiple demands will be no easy feat.”

There are at least 21 U.K. companies at imminent risk of an attack from activist investors, Alvarez & Marsal wrote in a December report. U.S. funds are increasingly eyeing British companies, and lower valuation multiples in the London market will “inevitably” lead to calls for breakups, it said.

The FTSE 100 Index trades at 12.1 times this year’s estimated earnings, compared with 14.6 times for the Euro Stoxx 50 of the biggest companies on the continent and 20 times for the S&P 500 Index of U.S.-listed firms, according to data compiled by Bloomberg.

One of the most high-profile campaigns so far has been Elliott Investment Management’s demands at GlaxoSmithKline, where it’s urging the blue-chip drugmaker to bolster its pharmaceutical expertise and calling into question the leadership of Chief Executive Officer Emma Walmsley.

Elliott has also been pushing for a breakup of utility SSE Plc, which has rejected calls for a split and instead unveiled a green spending drive funded by a dividend cut and asset sales.

Another big activist investor emerged at Shell in October, when it came to light that Dan Loeb’s Third Point LLC had built a $750 million stake in the energy giant to push for a breakup. Meanwhile, hedge fund Bluebell Capital Partners has demanded commodities trader Glencore Plc separate its thermal coal business, saying it’s become a barrier to investment.