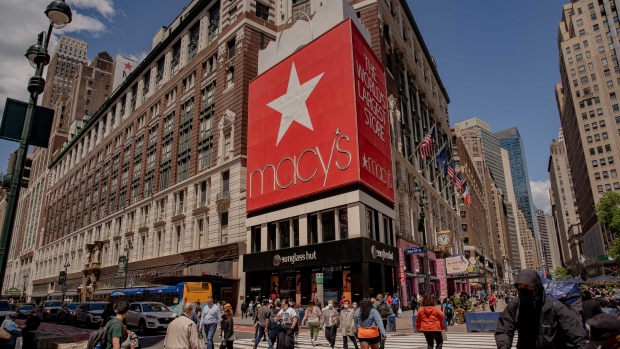 Pedestrians pass in front of Macy's Inc. flagship department store in the Herald Square area of New York, U.S., on Thursday, May 13, 2021. Macy's Inc. is scheduled to release earnings figures on May 18. Photographer: Amir Hamja/Bloomberg , Bloomberg

(Bloomberg) -- Jana Partners, which has pushed for Macy’s Inc. to spin off its online operations, has taken a stake in the department-store operator, the Wall Street Journal reported, citing unidentified people familiar with the matter.

The size of the stake wasn’t disclosed. News of the investment comes after Bloomberg News reported Oct. 6 that Jana was calling for Macy’s to spin off its e-commerce division.

The shares rose as much as 5% in New York after the report. Macy’s had roughly doubled in value this year through Wednesday, driven by investor enthusiasm at consumers’ willingness to spend following the end of early-pandemic restrictions.

Jana said in an investor presentation earlier this month that Macy’s could follow the lead of Saks Fifth Avenue, whose owner spun out its e-commerce business. At a similar valuation, Macy’s online business could be worth about $14 billion, Jana said. The activist firm reiterated its advice in a letter sent to Macy’s on Wednesday, the Journal reported.

Macy’s as a whole has a market valuation of more than $7 billion, including its brick-and-mortar business. The company has focused on its Polaris plan, which aims to improve the department store’s online sales performance, bolster its loyalty program and expand higher-margin private label brands. The company has said the strategy is working and the fundamentals of the business have improved.