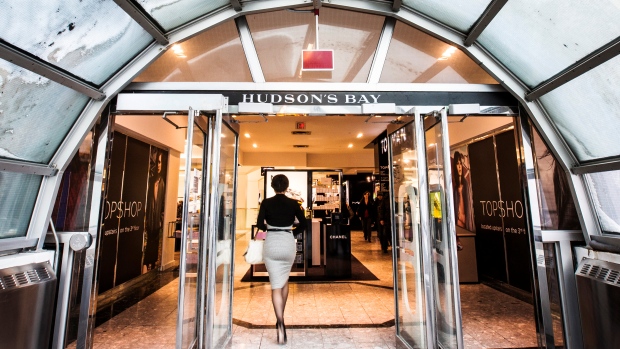 A woman walks through the doors at the Hudson's Bay Company flagship department store in Toronto on January 27, 2014 , Reuters/Mark Blinch

Activist investor Land & Buildings is calling a special meeting of Hudson’s Bay Company (HBC.TO) shareholders in the wake of Jerry Storch’s planned departure as CEO of the embattled retailer. In a release, Land & Buildings founder and Chief Investment Officer Jonathan Litt said he is not placated by Storch’s departure from the firm, framing it as an attempt to buy time without changing the underlying business.

“It is typical for undervalued and struggling companies such as Hudson’s Bay to try to position the exit of top executives as a reason for investors to give them more time to right the ship — while choosing to ignore the fact that the true decision makers and those at the board level who have been complicit in the decision making remain in power,” Litt said. “We believe this is what is happening at Hudson’s Bay.”

Land & Buildings has been agitating for HBC to unlock the value of its real estate, which HBC says is worth three times the company’s market capitalization. Land & Buildings said it will announce a full slate of proposals, including removing the retailer’s directors, in short order.

The missive from Land & Buildings is just the latest volley fired by the Stamford, Connecticut-based hedge fund. The firm, which accumulated a more than four-per-cent stake in HBC earlier this year, has made wide-ranging recommendations, including exiting Europe and a management-led privatization, said it doesn’t believe HBC Executive Chairman Richard Baker is listening to minority shareholders.

“In reality, Executive Chairman Richard Baker, who will be taking on the role of interim CEO, continues to call the shots,” Litt said. “This is even more problematic given how Baker has been stonewalling Land & Buildings and the investment community regarding a plan to unlock the value of the real estate embedded in the Company.”

At least one Bay Street money manager thinks there’s something odd happening behind the scenes at HBC in the wake of Storch’s surprise departure, which was announced late Friday.

In an interview on BNN, John Zechner, the chairman and founder of J. Zechner Associates, said Storch’s resignation immediately ahead of the key holiday retail season certainly raised his eyebrows.

“It’s just sort of getting some alarm bells going a little bit,” Zechner said. “There was no logical sense that he would leave just in front of the Christmas season. And you’re not get a new CEO who’s going to be able to do anything here. So, the most important season of the year — and he leaves? Something has to be going on.”