It’s like a gravitational field the S&P 500 can’t get free from, the place to which all rallies must return. And it was back in force Wednesday, eliciting angry notice from President Donald Trump as waves of selling dragged the benchmark within points of where it stood 21 months ago.

As has repeatedly happened in U.S. stocks, a few days of losses just undid weeks and months of progress, depositing the S&P 500 at an all-too-familiar level. Frustrated traders were left to lament that it has taken the better part of two years for the index to advance all of 15 points.

“I’m looking at this thing and my god, it’s like a Tour de France kind of bike ride,” Marvin Loh, global macro strategist at State Street, said by phone. “Massive climbs and great descents -- except these are horrible descents. And then we climb up to the next peak and then we get to ride it down.”

Trump loves touting equity gains more than his predecessors, who were usually wary of taking credit for unpredictable returns largely out of anyone’s control. And while the president’s record remains a solid one by historical standards, with the S&P 500 up almost 43 per cent including dividends since his election victory, on a price basis it’s the same return he could’ve claimed in January 2018. Amid uneven economic data and a two-year trade war, the market hasn’t budged since.

For investors watching day-to-day swings, two years of inertia have been anything but boring. February 2018’s convulsions in volatility markets were followed eight months later by the bull market’s nearest-to-death experience in seven years. The Federal Reserve has done a complete 180, cutting interest rates twice after a series of hikes. Now deteriorating economic data, including the worst manufacturing report in a decade, is reviving recession fears.

The president doesn’t see it that way. In another torrent of tweets Wednesday morning, he said Democrats’ impeachment inquiry is the reason stocks are falling. A day earlier, he blamed Fed Chairman Jerome Powell after equities got rocked by a weak factory report. 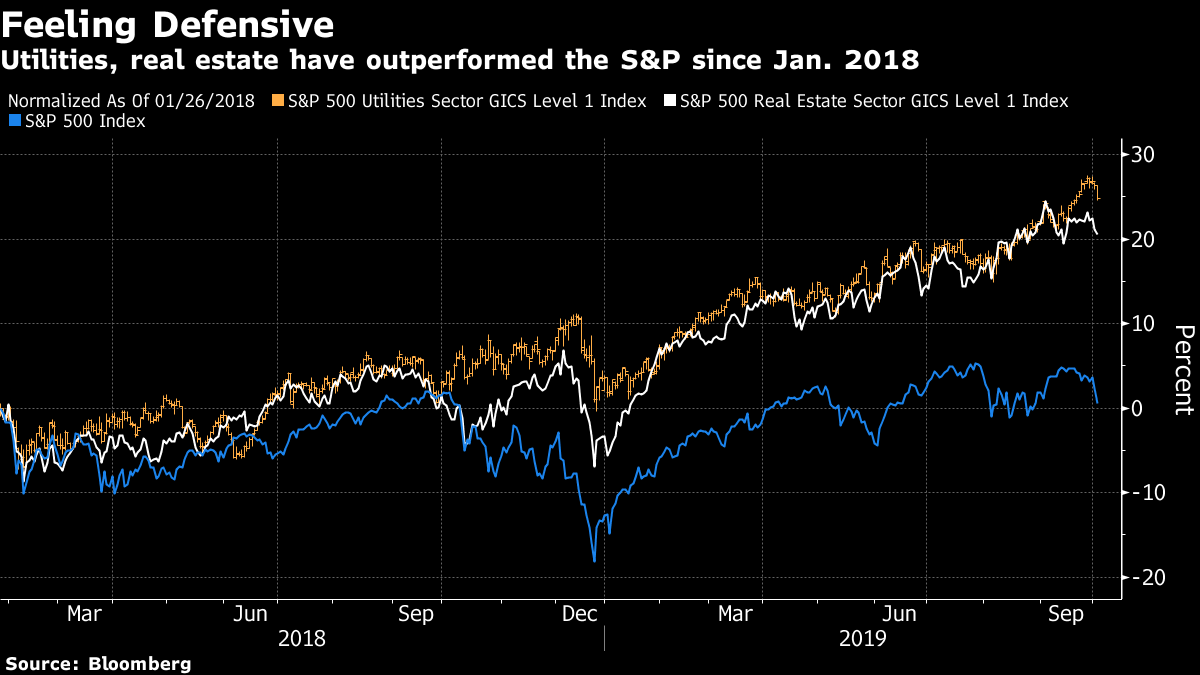 Politics aside, a more pressing concern for investors this week has been economic data that hints of a recession. Carmakers sank Wednesday after quarterly sales reports from Ford and General Motors added to concern over thinning profit margins in the industry. Ten of 11 S&P 500 sectors fell at least one per cent after a private payrolls report showed slowing growth one day after the Institute for Supply Management’s factory index slipped to 47.8 in September, the lowest level since 2009.

Of course, recession fear is nothing new, and as high as anxiety levels have occasionally gotten among investors, it’s been matched by the market’s resilience. After a vicious August in which the S&P 500 plunged more than 2.5 per cent three separate times and rallied one per cent or more seven, the index vaulted within points of a record in September.

As things stand now, it’s been 614 days since the S&P 500 surged to a high of 2,872 in January 2018. In that period, the benchmark has hit 18 fresh records, suffered through a correction, a near 20 per cent loss, and two more declines of 6% this year. After Wednesday capped the first back-to-back declines of one per cent this year, the index is roughly where it stood after Trump’s tax overhaul sent stocks soaring.

But what tax cuts gave by way of optimistic forecasts, Trump’s trade war has taken away. Persistent uncertainty has led companies to cut back on investment spending, while confidence has faltered.

“Ultimately, it’s all Trump, because you can blame trade and tariffs on Trump,” said Susan Schmidt, head of U.S. equities at Aviva Investors. “It’s noise that’s cascading out of actions from the administration. We have stalled out because we need another tailwind and nothing is there. If anything, the headwinds are keeping the market from moving up.”

But while equity markets have stood still, bond yields have plunged. U.S. 10-year Treasury yields stand more than 100 basis points lower than where they were when the S&P 500 hit a record in January 2018. That’s pushed equity investors into so-called bond proxies, with utilities and real estate stocks each up more than 20% in the same 21-month period that the S&P 500 has gone nowhere.

To Andrew Lapthorne, global head of quantitative strategy at Societe Generale, the move is ill-advised, as investors are lulled into a false sense of safety.

“Many argue that low bond yields justify higher stock valuations, but in a bear market ALL stocks tend to lose money,” Lapthorne wrote in a note to clients this week. “Investors are playing a game of chicken: hoping lower bond yields do not lead to a recession, but equally that the global economy remains sufficiently moribund to not cause bond yields to rise.”

Kim Forrest, the chief investment officer at Bokeh Capital Management in Pittsburgh, agrees, and says it’s encouraging that stocks have been stagnant. Amid trade concerns, impeachment proceedings and slowing growth, it’s quite a feat that the S&P 500 is still up 15 per cent year-to-date, she says. It could be worse, but that doesn’t mean investors should run for cover.

“What the hell is wrong with investors that they actually say, ‘I’m going into cash or I’m buying all utilities?’ You think that’s going to save you? It’s like the ocean going up and down and you’re trying to somehow make that not happen. It’s crazy,” Forrest said by phone. “If you’re an investor, the funds that are in the market should be around for some time period out in the future, not for immediate use today. This isn’t a bank account.”

--With assistance from Lu Wang and Kenneth Sexton.