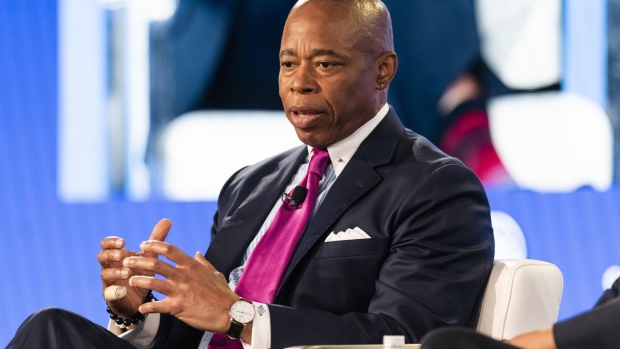 Eric Adams, mayor of New York, participates in a panel discussion during the Milken Institute Global Conference in Beverly Hills, California, U.S., on Wednesday, May 4, 2022. The event convenes the best minds in the world to tackle its most urgent challenges and to help realize its most exciting opportunities. , Bloomberg

(Bloomberg) -- New York City Mayor Eric Adams broke with fellow Democrats who focused on gun-control laws after Tuesday’s school massacre in Texas when he said the key to stopping shootings starts in the home.

Adams urged parents of schoolchildren to search their kids’ bags and rooms for firearms, ammunition and other weapons, adding that he doesn’t want to blame them or the children for violent incidents. The comments are indicative of his uncharacteristic approach to public safety, which is more akin to Bill Clinton-era politics than today’s Democratic mainstream.

At a briefing on Wednesday at police headquarters, the first-term mayor referenced a 2011 video that surfaced during his campaign -- for which he was mocked -- where he gave instructions to parents for how to search their child’s belongings for contraband. He said he planned to release an updated version of that video focusing on social media.

Democrats nationwide have staked out a different approach. In the Senate, Majority Leader Chuck Schumer suggested he would seek a vote on gun legislation, while President Joe Biden criticized the gun lobby and urged congressional action as well.

New York Governor Kathy Hochul, a Democrat, also used a Wednesday press conference to push for legislative solutions to the epidemic of gun violence gripping the country. Hochul said she would press the state’s legislature to raise the age to buy assault weapons from 18 to 21 and suggested that if the US Supreme Court rules, as expected, that most people have the constitutional right to carry a handgun outside of the home, she would call for a special session to address the ruling.

“I’ll do whatever I have to do to protect people in this state,” Hochul said.

The two New York leaders did acknowledge their limited power to make wholesale changes given Republican resistance to restrictions on gun purchases and laws that vary from state to state.

On Tuesday, 19 schoolchildren, two teachers and the gunman were killed in a shooting at an elementary school in Uvalde, Texas. It marks the latest mass shooting in the US, coming days after 10 Black shoppers were killed in an attack at a Buffalo, New York supermarket and a man was killed and multiple people injured in an attack at a Taiwanese church in Southern California.