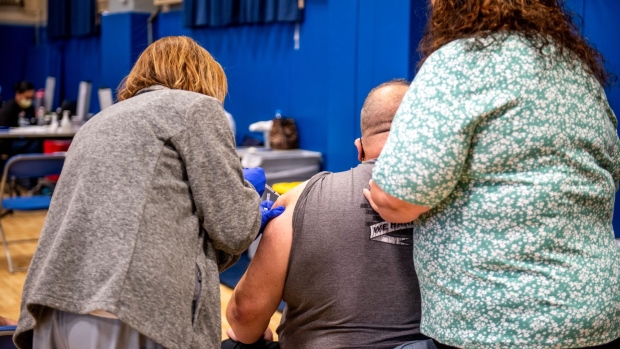 A healthcare worker administers a Covid-19 vaccine at a vaccination site at a church in Long Beach, New York, on Thursday, May 13, 2021. As the U.S. launches a campaign to vaccinate teens against Covid-19, public-health officials are leaping into action on a new strategy designed to involve family doctors, pediatricians and schools. Photographer: Emily Elconin/Bloomberg , Bloomberg

(Bloomberg) -- New York City Democratic mayoral candidate Eric Adams said he supports coronavirus vaccine mandates and would be open to students going back to remote classes if they don’t get shots in a wide-ranging debate with Republican contender Curtis Sliwa Wednesday night.

In the first of two debates between the candidates, Adams sought to paint Sliwa as an unserious opponent and at times refused to engage as he taunted him. On at least two occasions, moderators asked if he wanted to respond directly to Silwa, a radio host and the founder of the Guardian Angels anticrime group, and he declined.

Adams, the Brooklyn borough president and a retired police captain, is favored to lead the city, where Democrats outnumber Republicans 7-to-1. He’s already cast himself as the mayor-in waiting and has said he would announce appointments to city leadership after the Nov. 2 election if he wins. Still, the debate was a chance for him to argue for his plans before New Yorkers take to the polls in two weeks.

Mayor Bill de Blasio, who Adams and Sliwa are running to replace, earlier on Wednesday announced a vaccine mandate for all city workers and scrapped a test-out option. Workers who don’t get vaccinated by their deadlines would be placed on upaid leave. The requirement drew the ire of a powerful police union, that said it would bring legal action against the city.

De Blasio earlier said the city did talk with unions before moving forward with the mandate.

Both Adams and Sliwa said they would keep the city’s gifted and talented program in public schools, with certain reforms. De Blasio this month announced plans to phase it out by ordering the city’s Department of Education to implement a new accelerated program in all elementary schools starting with kindergarten in the fall of 2022. The gifted and talented program had been cited as one of the main drivers of the extreme racial segregation in the public school system.

Adams didn’t provide a plan for how the program would change under his watch but called the current version of the exam “unacceptable.” He said “I don’t believe a 4-year-old taking an exam should determine the rest of their school experience.”

The borough president added that if the vaccines are approved by health officials for young children, he would mandate them for those attending city schools, while remaining open to a remote option for those who refuse.

Asked whether he would require city workers to return to their workplaces full-time, Adams said he thinks the return should be done in waves, but ultimately getting people back in-person is beneficial for the economy.

“We have to get the city back up and running because of the ecosystem,” he said. “That employee is spending money in the restaurants, cafeteria, they’re getting their hair done and they’re doing other things.”

Adams also said he supports implementing congestion pricing as more people come back to the city and traffic increases, but there should be exemptions made for certain activities.

In stark contrast to the Democratic primary, Adams found himself on the defensive when it came to questions of policing. He made public safety the centerpiece of his campaign, but some of his primary opponents were critical of the police.

Sliwa suggested he was the only candidate willing to hire more officers, adding that Adams would allow the abuses that came with the Police Department’s stop and frisk practices to return.

Adams defended his record on the policy, which was ruled unconstitutional, responding that he testified against the practice and that his son was a victim of it. “I would never call for aggressive police tactics, I call for appropriate police tactics,” Adams said.

When it came to crime, homelessness and the crisis in the Rikers Island jail complex, Sliwa’s solution was deploying more workers. He argued that the city should hire 3,000 more police officers and 2,000 more correction officers. He said he would also move to Rikers himself to deal with the problems there firsthand.