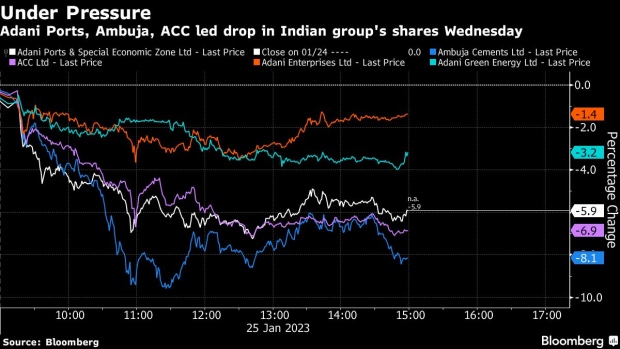 (Bloomberg) -- The most-liquid stocks controlled by the Adani Group, Adani Ports and Special Economic Zone Ltd. and Ambuja Cements Ltd., are also the most vulnerable in the event of an extended selloff in the diversified conglomerate’s shares.

That’s the view from Bloomberg Intelligence analyst Nitin Chanduka, who said the two stocks are also widely-owned by onshore funds.

Shares of all 10 listed companies related to the Ahmedabad-based group with interests from energy to infrastructure and media declined after US investor Hindenburg Research LLC said it was shorting the group.

Adani Group has eight stocks included in the MSCI India Index, with two of them also part of India’s key NSE Nifty 50 Index.