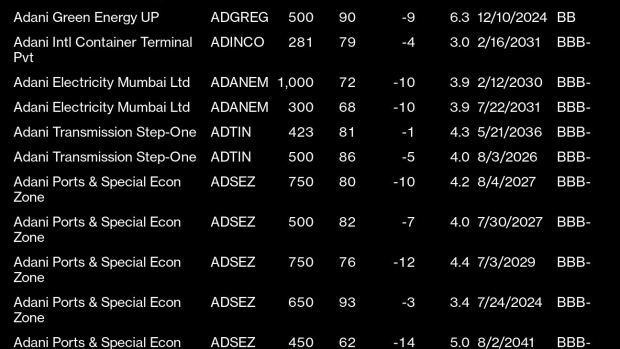 At least five dollar bonds issued by Adani group companies were indicated down by more than a cent as of 10:35 a.m. in Hong Kong, extending a selloff after Nate Andersen’s Hindenburg Research said it has taken a short position in these firms via US-traded notes and non-Indian-traded derivative instruments.

Among the top losers are Adani Ports and Special Economic Zone’s 2024 notes that fell by 5.1 cents on the dollar, the biggest single-day drop since April 2020, Bloomberg-compiled prices show. Adani Group entities saw their bond prices fall anywhere between about 1 and 14 cents on the dollar Wednesday, according to Bloomberg’s BVAL valuation service.

In an approximately 100-page report, Hindenburg Research alleges a web of Adani-family controlled offshore shell entities in tax havens, in the Caribbean, Mauritius and the United Arab Emirates. It says these were used to facilitate corruption, money laundering and taxpayer theft, while siphoning money from the group’s listed companies, whose businesses range from ports to power.

The firm said the opinions and investigative commentary were its own. Shares of Adani Group companies saw $12 billion wiped off their value after the accusations.

The report is “a malicious combination of selective misinformation and stale, baseless and discredited allegations that have been tested and rejected by India’s highest courts,” said Jugeshinder Singh, group chief financial officer at Adani, in a tweeted statement.

“A lot of the negatives and uncertainties surrounding Adani Group entities like leverage and corporate governance that the report focused on were already known, but the detail and extent of the research and timing of the release, with several Asian markets still out, saw a large impact,” said Kaveh Namazie, a credit analyst at Australia & New Zealand Banking Group Ltd.

Several bondholders who spoke to Bloomberg on Wednesday were still digesting the report and the potential implications. Actual trading was limited because of the Lunar New Year holidays in Asian financial hubs, so they warned that price moves could be exacerbated by thin liquidity. But the report had triggered some selling, they said.

The report comes as a key share sale from Adani Enterprises allocated shares at the top of an announced range. Investors including Maybank Securities Pte, Abu Dhabi Investment Authority, State Bank Of India Employees Pension Fund and Life Insurance Corp. of India are among investors who will buy stock in the $2.5 billion follow-on share sale by the company.

But as investors further digest the news and its fallout, selling in the bonds associated with the conglomerate may become less indiscriminate.