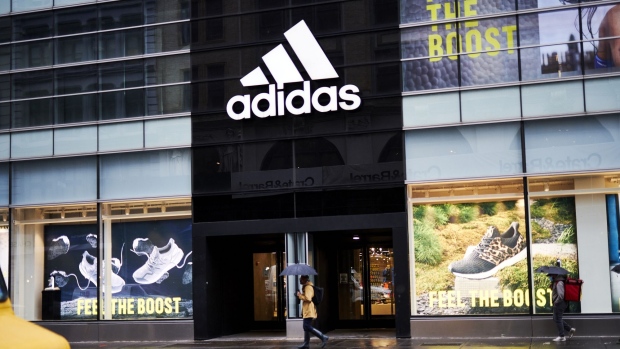 A pedestrian carrying an umbrella passes in front of an Adidas AG store in the SoHo neighborhood of New York, U.S., on Monday, Dec. 14, 2020. The U.S. Census Bureau is scheduled to release retail sales figures on December 16. , Bloomberg

Adidas AG is targeting sales growth of as much as 10 per cent annually through 2025 as it doubles down on e-commerce and sustainable materials.

The German sportswear maker forecast a surge in online sales and the steady build-out of shoes and apparel made from recycled materials to help push up profit by as much as 18 per cent a year. The company also expects mid-teens percentage growth in products for women. The shares rose as much as 8.6 per cent in Frankfurt Wednesday.

Adidas’s new five-year strategy -- called “Own the Game” -- is the first concocted under Chief Executive Officer Kasper Rorsted. He has won praise since taking the helm in 2016 for streamlining operations amid a prolonged boom in retro footwear, which drove the shoemaker’s shares higher before the pandemic.

Last year, though, criticism mounted after Adidas needed to take out a government-backed financing package to help weather the coronavirus crisis. The damage continued when the head of human resources resigned following accusations that she -- and the company -- had mishandled diversity issues.

The new plan is more ambitious than Adidas’s five year plan through 2020, which targeted annual sales growth in the high single digit range. Adidas achieved that in 2018 and 2019, but then revenue fell 16 per cent last year amid the pandemic.

Adidas’s stock price is still short of its January 2020 high. Shares of arch-rival Nike Inc. have advanced to record levels since last summer.

Looking ahead, Rorsted has promised a new era of innovation for Adidas -- a task that should be made easier, Rorsted insists, by the divestment of the Reebok brand. Adidas failed to reignite Reebok in the 15 years after acquiring it for US$3.8 billion.

The company is seeking to rely less on middlemen, aiming to get about half of its revenue from direct-to-consumer businesses by 2025. That includes a doubling of e-commerce sales to as much as 9 billion euros. Such moves should make up the bulk of sales growth.

To achieve that, Adidas will invest more than 1 billion euros in digital technology, including 3D design, sourcing of supplies and advertisement efforts. It’s hiring more than 1,000 “tech and digital talents” this year alone.

Meanwhile, Adidas plans for nine out of 10 articles to be sustainably produced by 2025, meaning they will be composed with recycled or biodegradable materials, for example, or will be designed for reuse.

The company said it expects to distribute between 8 billion and 9 billion euros to shareholders via dividends and share buybacks by 2025.

Earlier Wednesday, Adidas forecast sales this year will bounce back near 2019 levels as the impact of the pandemic fades. That will be driven by particularly strong demand this year in Asia and Latin America, it said.

Adidas has replaced the government-backed financing and has hired a new head of global human resources.