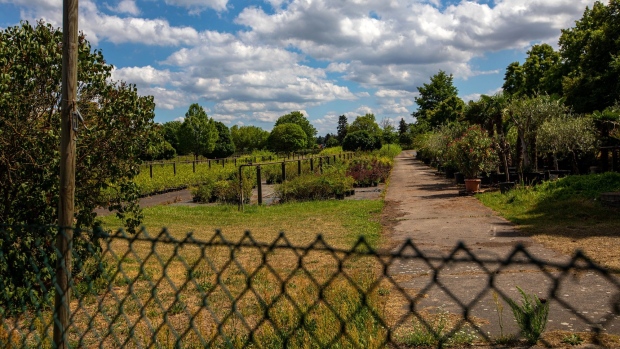 Fiscally conservative like all statutory health insurers in Germany, it uses contributions that employees and employers make to the country’s healthcare fund to pay for the medical needs of the 5.5 million people it covers. What’s left gets invested to build reserves, within a strict legal framework aimed at preventing losses.

These days, however, DAK may have taken more risk than it bargained for, after it extended a €100 million ($105 million) loan to finance a plot in Berlin earmarked for development. The land, acquired for €60 million, still sits idle two years on. Its owner, Aggregate Holdings SA, is shoring up its finances after its stake in Adler Group SA collapsed in value. And after multiple delays, it’s not clear when the development that DAK financed at 1.7 times the purchase price will be built.

The loan, which pays a 3% interest, is just one of many real estate investments sitting on the books of non-bank lenders who are now waking up to the risks they may have taken in assets perceived as safe. The declines of Aggregate and Adler, which spent the past year fighting short-seller allegations that it overstated the value of properties, put a magnifying glass over the matter. Looming large is the risk that public investors could once again be left shouldering losses, as they did after last year’s collapse of Greensill Bank.

DAK, which oversees about $24 billion in funds annually at its health division, has conducted an informal review of the loan but hasn’t found any compliance issues to warrant a formal probe, according to Elke Mueller, the insurer’s head of compliance. The Federal Office for Social Security is currently examining the investment, a spokeswoman for the supervisor confirmed by email.

“We are fully aware of the current, in part critical reports on Aggregate Holdings and Adler Group and are closely monitoring the market developments,” said Joerg Bodanowitz, a spokesman for DAK. Loans against properties are an established form of investment that meet the legal requirements and are used by other statutory insurers, he said.

Indeed, DAK isn’t the only public investor to funnel money into real estate projects that have run into obstacles. VBL, which oversees retirement funds for 5 million current and former public service employees in Germany, invested more than €130 million in debt issued by a subsidiary of Aggregate called German Invest, Manager Magazin reported.

But the project has been beset by delays and repayment of VBL’s loan, scheduled for Sept. 1, was already postponed twice, with the latest extension running through Nov. 30, according to the magazine. It wasn’t clear whether the debt had been repaid by that date. A spokesperson for VBL declined to comment.

Such loans highlight how for years developers have been able to borrow liberal amounts to finance vast new real estate empires. With interest rates near zero, they were buying land on the cheap and then borrowed large sums against it, in a wager that it would be worth a lot more once developed. Parcels of land in some instances were sold on to other investors at ever increasing valuations, with no construction starting.

The system worked as long as prices only went in one direction and investors such as DAK and VBL, which stepped in when banks retreated after the financial crisis, were eager to make a few percentage points in interest income. But with construction costs surging and central banks raising interest rates at a dizzying pace, developers have been forced to start marking down portfolios.

The property that DAK financed is a piece of agricultural land dotted with greenhouses and tree nurseries, about 10 kilometers (6 miles) south-east of central Berlin. It was bought in 2020 by a venture that included developer ZAR Real Estate, which then sold the company that owned the plot to Aggregate.

Conservative lenders will typically advance about 50% of a site’s value to finance the acquisition of land for development, according to Paul Lloyd, Chief Executive Officer of Mount Street LLP, which services real estate development loans across Europe. Some will advance as much as 70% for the highest quality sites that have construction approvals, he added. Loans that are also intended to finance construction typically require planning approvals to be in place.

The site financed by DAK has yet to secure planning approvals and it will require public infrastructure investment to develop into a new residential neighborhood. An appraisal commissioned by ZAR at the time valued the site, in Berlin’s Treptow-Kopenick district, at more than 200 million euros, according to a person familiar with the matter.

ZAR said the sudden increase in value reflected the fact that the property was earmarked for development. The loan agreement made clear that the purchase price of the land, which ZAR says amounted to 86 million euros including additional expenses, only made up part of the development costs, the firm wrote by email.

Aggregate, which bought the company that owns the property in 2021, said it “considers the valuation to be fair and realistic,” a spokesman wrote by email, pointing out the site can accommodate about 3,000 apartments. The valuation was carried out by a third-party expert before Aggregate became involved in the site, he added.

Aggregate most recently valued the property at €270 million and says it will be worth €1.4 billion once construction of the apartments, stores and offices planned for the site is completed. The district in which the property is situated was identified last year as a potential strategic development area by Berlin’s coalition government.

While that raises the probability that planning permission will be granted, Aggregate was already forced to revise its ambitious timetable for the project, though delays aren’t unusual for such large-scale developments. The investor initially expected to get permits in 2022 and complete construction in 2025. Now it’s predicting the “application of development plan” by 2024, with no completion date spelled out in its half-year report.

Aggregate, which is majority-owned by Guenther Walcher and run by tycoon Cevdet Caner, and Adler have both come under scrutiny by short-seller Viceroy Research over how they value their assets, in particular their development properties. Walcher sold real estate developer Consus to Adler after a period of eye-catching valuation growth, but Adler has since had to write off practically the entire purchase price — more than 1 billion euros in total — with its chairman calling it a “dud.”

The debt that DAK bought has an initial maturity of March of next year, though there’s an option to extend it. The 3% interest would have been a decent return on a loan secured against an existing property that generated rental income. But financing a development with no permits is riskier. And as borrowing and construction costs go up, so is the chance that some of the ambitious plans developers had just a year ago won’t be completed.

Elke Mueller, DAK’s compliance chief, says even if the borrower were to default, public investors like DAK are first in line when it comes to collecting on the assets used to secure the debt.

VBL, meanwhile, is earning a 15% interest on its investment, according to Manager Magazin. The bond was arranged by Corestate Bank, a lender that was owned by Aggregate until it was sold to Corestate Capital Holding SA last year. The parent company, whose funds have provided loans for Adler projects while its advisory arm helped finance others, recently agreed to a restructuring proposal presented by its bondholders.

Aggregate has lost most of its stake in Adler when the slump in the landlord’s share price triggered a margin call, and has put one of its prized Berlin real estate projects up for sale to reduce debt. Its bonds have lost more than 60% of their face value since being issued in 2020.

--With assistance from Laura Benitez.