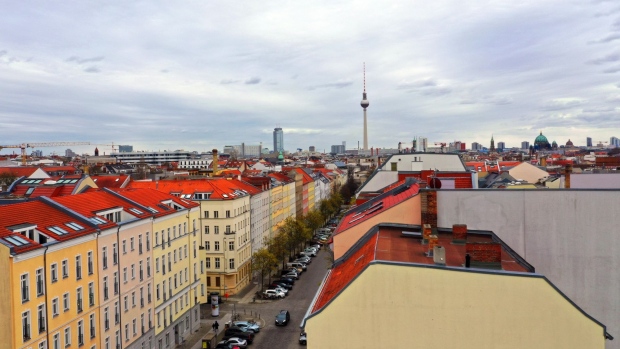 (Bloomberg) -- Adler Group SA marked down its real estate portfolio as rising interest rates weigh on valuations, underscoring the urgency for the landlord to finalize a deal to obtain funding for the next years.

The company cut the value of its portfolio by 2.3% during the third quarter, pushing its relative indebtedness close to a key threshold, according to a statement Tuesday. The announcement came days after Adler announced a preliminary deal with bondholders to give it more time to reduce its debt.

Adler is racing to complete the deal in the first quarter as the landlord under Chairman Stefan Kirsten is fighting back against short-seller allegations of fraud. But with few options for raising fresh capital after its auditor quit, the company has been forced to turn to disposals just as the German real estate market’s decade long boom is coming to a sudden end.

Adler, which denies the accusations, has already sold thousands of apartments and now plans to become a Berlin-focused business with little exposure to the development projects that were a main focus of the short-seller allegations.

“In line with the agreement with major bondholders, Adler Group revised its strategy, pursuing a transition to a pure-play Berlin anchored portfolio with a selective development exposure and limited capex requirements,” the company said.

Adler has already written off the entire value of Consus Real Estate AG, the developer it acquired from a shareholder as part of the controversial three-way deal that formed Adler Group SA. It sold a further three development projects in the third quarter for a total of 218 million euros ($226 million).

The mark-downs to its portfolio in the third quarter pushed Adler’s loan-to-value ratio to 59.9% at the end of September, or 55% when adjusted for its stake in Brack Capital Properties NV which is being held for sale. Under the terms of its bonds, the adjusted ratio must not exceed 60%.

To repay some investors, Adler has provisionally agreed to a secured loan from key bondholders that, if approved, would grant it a lifeline until 2025. It plans to appoint a chief restructuring officer and add an additional non-executive with “extensive financial expertise” to its board, it added.

Shares of the landlord fell 11% at 10:11 a.m. in Frankfurt trading, after they surged 42% on Monday when it announced the preliminary bondholder agreement. The stock is down almost 80% this year.

Adler said it had hired PricewaterhouseCoopers LLP to analyze its compliance framework, a process that concluded “minor gaps to state-of-the-art status,” which the company said would now be closed.

It has given up looking for a new auditor on its own and instead will ask a German court to appoint one, Kirsten said on a call with journalists. The court can only appoint an auditor for the firm’s German operations and the auditor can decline, meaning the outcome is still open, he said.

The debt deal sought by Adler would extend the deadline by when the firm needs to present audited results to bondholders from April to December next year. KPMG quit as Adler’s auditor in May and Kirsten said Wednesday that they held talks with several other audit firms about accepting the mandate but all negotiations ultimately failed.

The company’s future now hinges on creditors approving the 937.5 million-euro rescue loan that’s part of a plan that has received backing of holders representing about 45% of its bonds. It needs 75% approval to implement the plan.

The company expects to update the market next week on how many holders have accepted the restructuring, Kirsten said. It will convene a bondholder meeting in the middle of next month, he added.

(Updates with shares in ninth paragraph, comments on auditor search from 11th.)