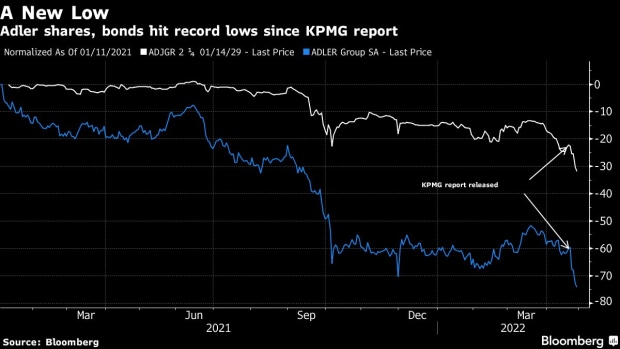 The Adler Group SA Uberlin luxury apartment construction site in Berlin, Germany, on Tuesday, Nov. 2, 2021. A major landlord in Germany, Adler has aggressively sold assets to help prop up its balance sheet, putting about 40% of the company’s portfolio on the block. , Bloomberg

The embattled German landlord wrote down the value of its Consus development business by 1.08 billion euros, blaming construction inflation and supply chain bottlenecks that had forced it to revise assumptions about the likely profitability of its projects, according to the delayed full-year earnings statement Saturday.

Auditor KPMG refused to provide an opinion on the accounts after Adler withheld correspondence about related party deals that are a focus in fraud allegations by short seller Fraser Perring. That meant auditors were unable to judge whether the deals, for which Adler is still owed money in some cases, had been accounted for properly, KPMG said.

The delayed earnings report comes days after Adler released findings of a KPMG probe into the allegations made by Perring’s Viceroy Research in October. The publication of the probe triggered a further sell off in the company’s stock and bonds because KPMG was unable to refute many of the accusations and found a series of corporate governance failings.

Key to Perring’s accusations were valuations Adler placed on its holdings and deals between the landlord and companies linked to some of its backers, including the extended family of Austrian financier Cevdet Caner. Adler is still owed money for some of the deals, which date back several years. It has refused to write off the sums despite recommendations from KPMG that it should mark down the receivables from at least on of the deals.

The company on Saturday acknowledged there was a risk it may not recover 58.6 million euros it is owed by Azeri investor Natig Ganiyev, who agreed to buy its Accentro unit in 2017. It now has more than 423 million euros in in outstanding receivables. That’s down from a restated figure of 461 million euros for 2020.

Adler, which had rapidly grown into one of Germany’s biggest landlords through debt-fueled acquisitions and a controversial merger, has spent much of the last year reeling from the allegations by Viceroy as well as an anonymous whistleblower, who sent information to the firm’s banks. The company sold off about 40% of its 70,000 apartments in an effort to pay down a debt pile that had reached $9 billion.

In the past week, since KPMG released its report, Adler’s shares have lost 38% of their value and are trading at a record low. While KPMG’s investigators satisfied themselves that the bulk of Adler’s portfolio was valued accurately, they were unable to disprove many of the other claims.