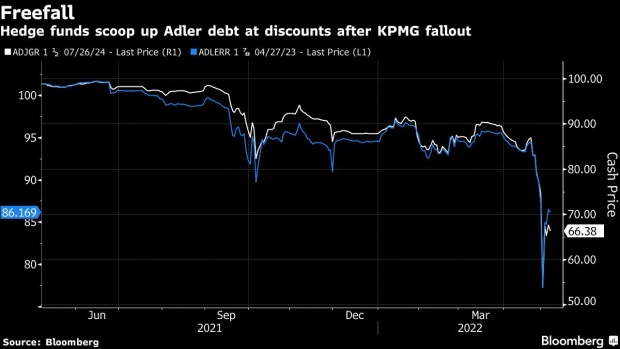 (Bloomberg) -- Creditors of Adler Group SA are looking into ways that may potentially allow them to claim their money back, after the German landlord made seemingly contradictory disclosures about a loan it had taken out from a subsidiary.

At issue are 265 million euros ($280 million) borrowed from a unit tied to its Adler Real Estate subsidiary at the end of December. The company didn’t disclose the loan until late March -- when it said the loan agreement had been signed that day -- prompting investors to ask whether the money may have been used without proper approval to plug looming liquidity holes.

The bondholders are now seeking advice from restructuring advisers and law firms over whether that constitutes a breach of the bond terms, according to people familiar with the matter. Some creditors of Adler Real Estate also argue the loan effectively put money out of their reach, should the company default, the people said, asking not to be identified discussing internal deliberations.

The discrepancy in dates drew questions from investors on a call with Adler’s management Tuesday, asking why there was a three-month gap. Chairman Stefan Kirsten, appointed in February to help restore confidence in the company after fraud allegations by short seller Fraser Perring, vowed to address the issue with investors after the call, though as of Thursday afternoon no updates had been provided, according to bondholders.

“You will never catch me backdating anything in my life,” Kirsten said on the call, after being asked if he was involved in approving the loan agreement months after it was granted. “Do me a big favor and never bring me into connection with backdating anything, that would be most appreciated.”

A representative for Adler declined to comment on efforts by bondholders to organize and said the company was continuing to collect questions from investor calls and provide answers.

“We will provide the information in due course,” the spokesman said in an emailed statement.

Adler has unsuccessfully tried to regain investor confidence since Perring’s Viceroy Research accused it of being effectively run by a small group of outsiders including Austrian tycoon Cevdet Caner for their own benefit. The landlord has sold large portions of its assets to reduce its debt pile and shore up liquidity, but its failure to disprove some of Perring’s allegations through a forensic probe only accelerated a selloff in its stock and bonds.

Creditors are now also in discussions with each other about forming a group large enough to demand early repayment of the bonds in case the company was in breach of debt rules, according to some of the people. Terms of the bonds set out varying thresholds -- 15% of the principal amount in one case, 25% in another -- before notice can be given to the company.

The contentious loan was granted a day before Adler Group repaid a 300 million-euro revolving credit facility from its banks that it had drawn down earlier in the year to shore up liquidity. The landlord says it used money from divestments to repay the credit line. Those asset sales were completed on Dec. 29, the same day it took out the loan. Adler announced their completion the following week.

In Adler’s Orbit, a Set of Deals Leads to Azeri First Family

Adler has said the credit line was no longer needed because the company had plenty of cash, and that the facility has since expired. Some investors, however, wonder why a company that only recently struggled with liquidity issues would give up access to such financing.

When Adler first disclosed the existence of the loan three months later, it had to correct its initial filing after understating by about 12 million euros the amount of the borrowings. And it wasn’t until Adler Real Estate filed its annual accounts on April 30 that investors learned the loan had been handed out already in December.

The disclosure added to a perception of intransparency that came to the fore again last weekend, when the landlord published long-delayed annual results. Its auditor, KPMG, declined to endorse the accounts, saying Adler had withheld information needed to assess key deals. The unusual step shocked markets, sending shares and bonds of the company tumbling further.

Bondholders questioned whether KPMG’s refusal meant that Adler Group’s result had even been audited. The company was required to file audited accounts by the end of April in order to comply with the terms of its bonds. Chairman Kirsten insisted that, from a legal standpoint, the accounts were indeed audited.

Still, S&P Global Ratings on Thursday downgraded its credit rating on Adler, citing KPMG’s decision. The termination of the revolving credit facility also means Adler has less liquidity, so the company is now even more reliant on asset sales to repay its next bond in April 2023, S&P said.

Adler Real Estate’s bonds due 2023 are indicated at about 85 cents on the euro and credit-default swaps insuring the debt showed there’s a 77% probability of default within five years. Bonds of parent company Adler Group are trading between 55 cents and 70 cents, according to data compiled by Bloomberg.