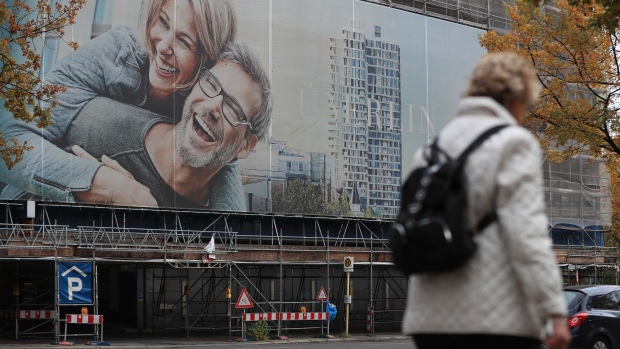 A billboard for luxury apartments at the Adler Group SA Uberlin apartment construction site in Berlin, Germany, on Tuesday, Nov. 2, 2021. A major landlord in Germany, Adler has aggressively sold assets to help prop up its balance sheet, putting about 40% of the company’s portfolio on the block. , Bloomberg

(Bloomberg) -- Embattled real estate firm Adler Group SA said it got enough support to go ahead with a planned rescue deal even after a group of bondholders said they oppose it.

Adler said that more than 60% of its bondholders have now signed up to the deal according to a statement on Friday. That threshold allows it to use “an alternative implementation route” if the acceptance level of 75% for each of Adler’s outstanding bonds that’s needed for the preferred route can’t be reached, the company said in the statement.

The announcement comes a day after a statement from a group of investors holding more than 34% of the company’s senior notes due in 2029 on Thursday who said they reject the deal. The group said the plan favors Adler’s nearer-term securities.

Adler didn’t say which law it will use to override the investor opposition. It previously mentioned a German insolvency act known as StaRug as one option and unspecified “foreign laws.” The Starug act doesn’t mention a 60% threshold to adopt a deal and Adler declined to comment on the law underlying its Friday announcement when contacted by Bloomberg.

The debt package unveiled by Adler last month deal includes providing a new €938 million ($992 million) loan to the company to pay back maturing bonds while also giving it permission to extend debt maturities, pay interest with additional debt and waive the need for audited accounts until later next year. The plan has been backstopped by a steering committee including BlackRock Inc., Pacific Investment Management Co. and Schroders Plc.

Adler has been selling assets to pay down debt since accusations from short seller Viceroy Research, together with a memo to the company’s lenders compiled by a former associate of Austrian businessman Cevdet Caner, triggered a collapse in the company’s stock and bond prices.

The landlord and Caner have denied the charges and a forensic audit conducted by KPMG cleared the company of systemic fraud. The review couldn’t disprove all of the allegations and KPMG subsequently quit as auditor, triggering a further sell-off.

(Updates with details on acceptance threshold in fourth paragraph.)