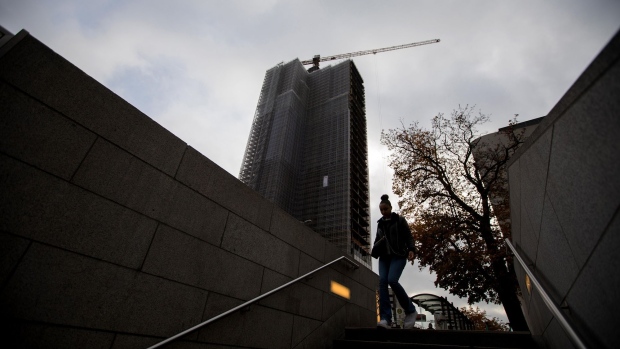 The Adler Group SA Uberlin luxury apartment construction site in Berlin, Germany, on Tuesday, Nov. 2, 2021. A major landlord in Germany, Adler has aggressively sold assets to help prop up its balance sheet, putting about 40% of the company’s portfolio on the block. Photographer: Krisztian Bocsi/Bloomberg , Bloomberg

(Bloomberg) -- A group representing shareholders of Adler Group SA is requesting a special audit of its subsidiary ahead of an annual general meeting in a bid to review alleged accounting irregularities.

The request was sent to Adler on behalf of investors led by Schutzgemeinschaft der Kapitalanleger, a German lobby group for shareholders, earlier this week, according to a statement sent to Bloomberg. The motion will be presented at the AGM of Adler Real Estate -- the firm’s subsidiary -- on August 31.

The special audit would pursue claims against members of the executive bodies for alleged damages and losses caused to shareholders, according to SdK.

“Significant irregularities” in Adler’s Executive Board activities have prompted shareholders to apply for a special audit, according to Marc Liebscher, a member of SdK’s board.

The move is the latest challenge to the German real estate group that was first targeted by short seller Viceroy Research in October. The company has rejected accusations of fraud, but bond and share prices has since tumbled.

The audit would seek to clarify the influence exerted on Adler by Cevdet Caner -- an Austrian tycoon who runs one of Adler’s largest backers and whose wife is the second-biggest shareholder -- as well as the role of the people and companies close to him.

It would also examine the sale of a Duesseldorf property for 375 million euros ($380 million) to a firm owned by his brother-in-law, in a deal that financial regulator BaFin believes overvalued the asset.

The special auditor would look into a 265 million euro loan made by Adler Real Estate in late December -- potentially without prior consent from shareholders -- and the sale of Accentro Real Estate AG’s shares to Azeri investor Natig Ganiyev, for which Adler was never fully paid.

“In recent weeks, it has also unfortunately become apparent that both the management of Adler and its parent company, Adler Group SA, have no interest in transparent clarification. Therefore, a special audit must bring clarity,” SdK said.