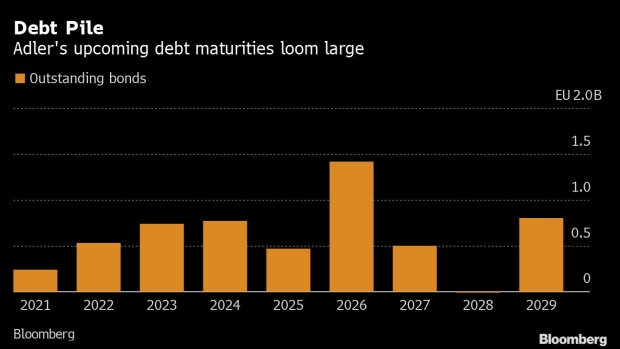 In the weeks since coming under short-seller attacks, Adler Group SA has agreed to deals to sell almost 30,000 apartments and started seeking a new valuer for some of its most contentious assets. What it hasn’t done is given investors a chance to hear its answers to the questions raised.

That may finally change next week, when the German landlord is set to report third-quarter results and host a call with investors.

It’s seven weeks since Fraser Perring’s Viceroy Research published a 61-page report alleging the company is built on systemic fraud for the benefit of a handful of friends and associates led by Austrian entrepreneur Cevdet Caner. Several analysts have since dropped their ratings of the company or slashed price targets. This year, the company’s stock has slumped more then 65% and its bonds due in 2029 have lost about 12% of their face value.

Adler has only issued brief responses denying the allegations and saying its valuations and transactions have been independently appraised and audited. While Caner, who has downplayed his influence over the firm, has made a criminal complaint against Perring and conducted a series of interviews in which he’s called the short-seller’s research baseless, management has otherwise remained silent.

“I am surprised they haven’t provided their response to the Viceroy allegations,” CreditSights Senior Analyst David Shnaps said. “They have had almost two months.”

Adler has been an active dealmaker in recent years, and one question investors have is whether the cash from those deals is flowing in in a timely manner. The company has accrued about 1 billion euros ($1.1 billion) of receivables on its balance sheet, mostly relating to deferred payments on the deals.

Viceroy has questioned whether those receivables will ever be collected, claiming that several of the transactions are with parties that appear to be related to Adler or its shareholders.

More than 550 million euros of those receivables are due to be paid this year. Any update on the proportion of that total that has now been collected will be closely watched.

Despite a series of interviews by the Austrian entrepreneur in the aftermath of the Viceroy report, the extent of Caner’s relationship with Adler remains an open question.

Caner, whose Level One group of companies was one of the largest real estate bankruptcies in Germany when it collapsed during the global financial crisis, has said he has provided advice both to Adler and its largest shareholder Aggregate Holdings SA. He’s emphasized his skills as a dealmaker rather than a corporate executive to explain his lack of management position at those firms. But exactly which deals he advised the company on, and on what terms, remains unclear.

Adler’s management hasn’t addressed whether Caner was involved in the sale of a majority stake in the Gerresheim development project in Dusseldorf to a company controlled by his brother-in-law. That deal has since been cancelled.

In addition to his family’s near 5% stake in Adler held via Mezzanine IX, Caner has confirmed in interviews since the publication of the Viceroy report that he advises Aggregate, which has a 26.6% interest in the company. Fairwater Multi-Strategy Investment, whose real estate fund is controlled by Aggregate, owned a further 5.5% stake until last month, Bloomberg News reported.

Adler has drawn down the entire 300 million euros of its revolving credit facility, Bloomberg reported this month. That’s a key source of liquidity that executives previously said they had no intention of using. The draw-down raises questions about the firm’s liquidity profile, and what the loan was used for, as well as having potential implications for its credit rating.

Adler has 170 million euros worth of bonds due to mature on Dec. 6 and investors are likely to ask about the plans to pay off or refinance that and other debt as markets are now demanding a higher yield from the company. Adler could offer to buy some of its upcoming bonds back from investors at a discount, in a bid to clear looming debt obligations.

A key issue raised by Viceroy’s report is whether Adler’s properties are overvalued. Adler has agreed to sell properties outside Berlin that amount to about 40% of its existing portfolio. Those deals would effectively help to certify Adler’s valuations if completed, so investors will be keen for an update on their progress.

Questions also remain over its assets in the German capital. The average rent on the group’s Berlin apartments is 7.88 euros a square meter, a discount to the market average of 9.31 euros a square meter as judged by valuer CBRE Group Inc., according to Adler’s second quarter earnings report. And yet the company applies a bigger multiplier to that rent to calculate the value of its properties than its rivals, implying they are of higher-than-average quality.

While many of the issues pre-date the three-way merger between Adler Real Estate, ADO Properties and Consus, and the group has appointed a new head of development, investors will be looking for a progress update. Close attention will be paid to any revised time lines for the company’s projects and new cost estimates for existing developments.

Adler’s initial response to Viceroy included a pledge to appoint external independent advisers and auditors “to conduct a comprehensive review of allegations, especially regarding the third-party transactions.”

The company also pitched for new valuers to appraise its development portfolio in late October, but investors are still waiting for an official update.