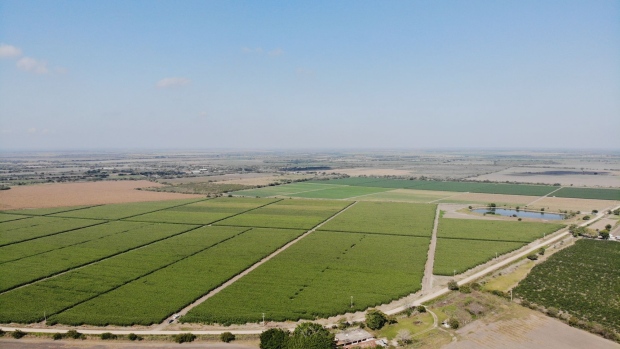 A corn field in San Luis Potosi, Mexico, on Sunday, Feb. 7, 2021. Mexico's corn imports could fall by about 9% this year, as the government seeks to discourage the use of genetically modified grains and boost its local crop, the agriculture ministry said on Tuesday. Photographer: Mauricio Palos/Bloomberg , Bloomberg

(Bloomberg) -- Archer-Daniels-Midland Co., one of the world’s biggest grain traders, is injecting carbon dioxide released by its corn plants underground, using commercial-scale technology that’s the first of its kind.

The company just completed a project with the University of Illinois proving that its methods to capture carbon are safe, according to a Wednesday release. That will aid its commitment to reduce greenhouse gas emissions by 25% against a 2019 baseline.

Carbon capture and storage plays a key role in eliminating man-made greenhouse gas emissions, yet few businesses have implemented it on a large scale.

In the project, ADM used wells to pump carbon dioxide 6,500 feet underground. The site was able to accept and store 1 million metric tons over three years. That’s equivalent to annual emissions from about 1.2 million passenger cars, according to the release. The corn plant in Decatur, Illinois, where the emissions originated from processes the grain into starches and sweeteners, among other products.

ADM has another well set to operate until 2022 that could store 5.5 million metric tons of the gas. Together, the two projects have already stored 3.4 million tons.