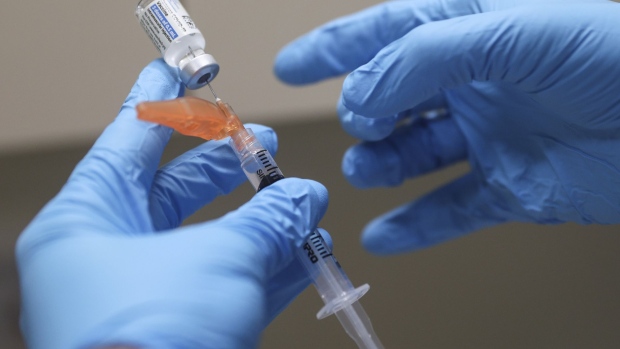 (Bloomberg) -- Adobe Inc. is taking one of the toughest stands as a company on vaccinations, telling U.S. employees they have to be vaccinated against Covid-19 by Dec. 8 or be placed on unpaid leave.

The move came even as new Covid-19 cases in the U.S. have dropped to the lowest level since July. In the U.K., where new cases and fatalities have been rising, the country’s finance minister signaled there won’t be any more lockdowns.

Pfizer Inc. said the Covid-19 shot it developed with BioNTech SE was 90.7% effective against symptomatic cases in kids aged 5 to 11. Thailand will soon allow inoculated travelers from the U.S., U.K. and most of Europe to enter without quarantines.

U.K. Chancellor of the Exchequer Rishi Sunak said the country’s inoculation program means there won’t be any more lockdowns, shrugging off warnings from some medical experts that the health-care system could be overwhelmed this winter.

“There’s a range of options that are available, and those are not options that involve lockdowns or very significant economic restrictions,” he said in an interview with the Times of London.

A poll for the Times shows 69% of those surveyed would support bringing back a work-from-home edict and 76% would back a mask mandate. The idea of shutting pubs and restaurants received backing from 22%.

Adobe Inc. has told U.S. employees they have to be vaccinated against Covid-19 by Dec. 8 or be placed on unpaid leave, CNBC reported, citing an email to employees.

The policy is imposed due to President Joe Biden’s executive order for federal contractors to have all employees vaccinated. The company said it will consider religious and medical exemptions for employees who can’t get the vaccine.

Over 3 million in the U.S. retired early because of Covid-19, researchers said.

The surge in stocks and housing values during the pandemic allowed young baby boomers with a nest egg to stop working.

The nation’s Joint Committee on Vaccination and Immunisation approved second Covid inoculations for 16- and 17-year-olds, according to the Guardian, which didn’t attribute the news. The decision could be announced next week, the newspaper said.

There are now booster recommendations for all three available Covid-19 vaccines in the U.S., and the CDC said those eligible will be able to choose a different booster from the vaccine they originally received.

Meantime, an estimated 1-in-10 inmates in Wyoming prisons are infected with Covid-19, the newspaper reported. Testing this week revealed a record 222 new infections, including some prison staff.

Most states remain in the “high” level of community transmission determined by the CDC. Those one step lower, in the “substantial” category, include New Jersey, Maryland, California, Mississippi, Florida, Hawaii and Louisiana.

Robin Hood Foundation, the anti-poverty charity that hosted about 3,000 people at the Javits Center on Wednesday night, has informed LIVE Event in Progress attendees that a guest tested positive for Covid-19 the following afternoon.

The person was Paul Tudor Jones, the hedge fund manager and founder of Robin Hood. He said in a statement to Bloomberg that he took a PCR test after a co-worker at his home tested positive and that it showed positive. This was after he he had a negative PCR test for Covid on Monday.

Romania tightened Covid restrictions as it seeks to contain one of the worst outbreaks in the world recently, the government said in a statement on Friday. As of Monday, all shops and restaurants will close at 9 p.m. following a nighttime curfew, face-mask wearing will be mandatory everywhere and a green pass will be required for access to all non-essential areas. Private events such as weddings and parties will be banned for 30 days.

The government also urged companies and state institutions to have half of their employees work from home for the next 30 days or work shifts if possible. Romania reported 15,410 new cases in 24 hours on Oct. 22, and 357 deaths.

Walgreens has started offering Moderna and J&J Covid-19 vaccine boosters to eligible individuals at stores nationwide, the company said Friday in a statement.

The move comes a day after the boosters won the CDC’s endorsement. There are now booster recommendations for all three available Covid vaccines in the U.S.

The CDC also said those eligible people will be able to choose a different booster from the vaccine they originally received, allowing greater flexibility for patients and doctors as the U.S. tries to stave off another wave of infections.

Pfizer Inc. said the Covid shot it’s developed with BioNTech SE was 90.7% effective against symptomatic cases in kids ages 5 to 11, according to a briefing document posted on the Food and Drug Administration website.

Pfizer posted the document in advance of a key hearing scheduled for Oct. 26 where an advisory panel will debate whether the vaccine should be cleared for young children. The efficacy result is based on a trial of about 2,250 children, according to the briefing documents.

About one in 55 people living in private households in England had Covid-19 in the week ending Oct. 16, compared with 1 in 60 the week before, according to estimates from the Office for National Statistics. Infections were still highest in school children aged 7 to 11, it said.

Meanwhile, millions of people could have their boosters brought forward as ministers consider plans to cut the usual six-month wait to five, the Guardian reported.