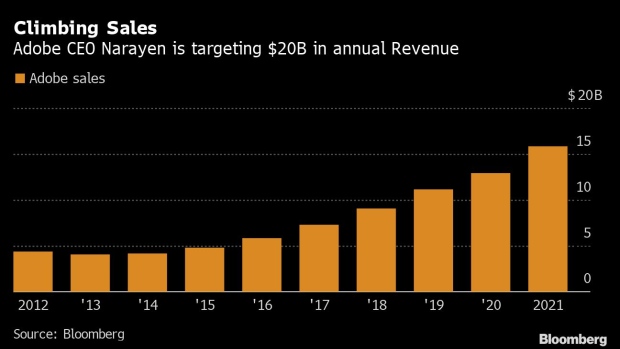 (Bloomberg) -- Adobe Inc. Chief Executive Officer Shantanu Narayen touted the software company’s nearly $5 billion in cash on its balance sheet and said it is always in the market for acquisitions.

“We’re always looking,” Narayen said Monday in an interview with Bloomberg Television. “Our criteria continues to be making sure that there’s great technology, that there’s a culture match, and that financially it’s a good deal for our shareholders.”

Adobe, the maker of creative and marketing software including Photoshop, bought Frame.io Inc. last year for $1.3 billion, and acquired Workfront Inc. in 2020 for $1.5 billion. Both companies make video collaboration software tools. Narayen said the deals “have turned out to be phenomenal.”

Adobe, with the aid of acquisitions, has expanded its marketing, analytics and e-commerce products, which Narayen is counting on to spur the company’s effort to reach $20 billion in annual revenue. While Adobe estimates the market may be worth as much as $110 billion, it faces strong rivals such as Salesforce Inc. and Twilio Inc. as well as a sluggish global economy that may be curtailing spending in these areas.

Adobe is one of the industry’s longtime success stories, but has faced rare investor skepticism this year over fears that businesses are reducing their spending and that smaller competitors, including Canva Inc. and Lightricks Ltd., are making in-roads among new customers. Adobe shares have fallen about 28% in 2022 amid a broad decline in software stocks.

Narayen shrugged off the competition. “We are the largest company in that space, we have an incredible portfolio,” he said. “We’re going to win because we created these markets, we have a vision for the market.”

Adobe said in March it was revising prices for its signature creative suite, the first major overhaul since 2017. The new structure will reflect features Adobe has added in the past five years, including new collaboration capabilities, executives said.