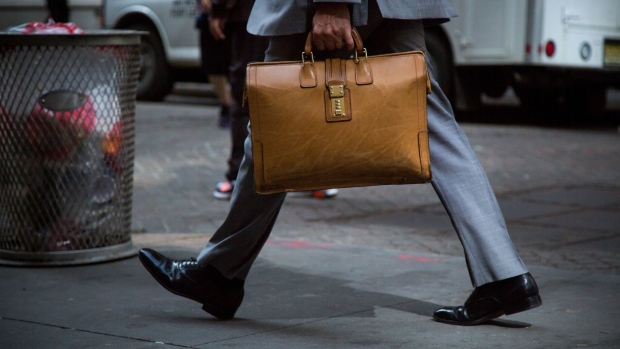 A man carries a briefcase while walking down Wall Street near the New York Stock Exchange (NYSE) in New York, U.S., on Monday, June 13, 2016. , Bloomberg

(Bloomberg) -- Advent International is the latest private equity giant to consider tapping a buoyant fundraising market for a record buyout fund, according to people familiar with the matter.

The U.S. firm is targeting about $25 billion for a new flagship vehicle and could begin seeking commitments next year, the people said, asking not to be identified discussing confidential information.

Deliberations are ongoing and no final decisions on the size or timing of the fundraising have been taken, they said. A representative for Advent declined to comment.

Fundraising cycles for private equity firms have shortened on record capital deployment and inflows, as investors seek out asset classes that can deliver higher returns in the current low-interest rate environment; Advent only raised its last buyout fund, a $17.5 billion vehicle, in 2019. The industry’s biggest names have raced to capitalize on this demand.

Carlyle Group Inc. is seeking to raise as much as $27 billion for its latest flagship, in what would be the largest-ever private equity pool. In July, Hellman Friedman took in $24.4 billion for its biggest fund to date. Others, including Cinven and Permira, remain on the fundraising trail.

The vast sums of money at their disposal has fueled a fiercely competitive market for assets, in which private equity firms have been spending big to beat out rivals across sectors -- particularly in health care and technology. Advent has struck a number of deals this year, including the roughly $8 billion purchase of drugmaker Swedish Orphan Biovitrum AB.

Advent manages $81 billion in assets, according to its website. It’s known to focus on leveraged buyouts, corporate carve-outs and growth equity investments, primarily in Europe and North America, and for a strong track in high-growth sectors such as payments.