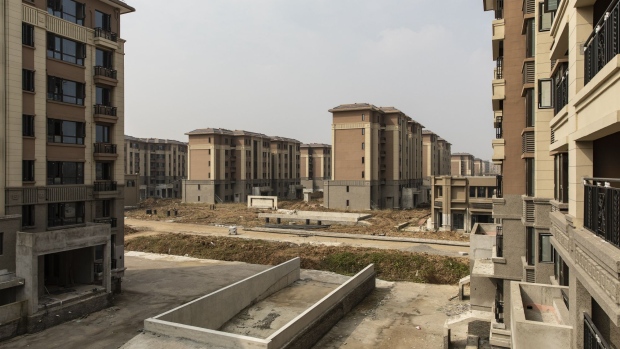 Unfinished apartment buildings at the construction site of China Evergrande Group's Health Valley development on the outskirts of Nanjing, China, on Friday, Oct. 22, 2021. China Evergrande Group pulled back from the brink of default by paying a bond coupon before Saturday’s deadline, giving the property giant at least another week to come to grips with a debt crisis that has rattled investor confidence in the world’s second-largest economy. , Bloomberg

(Bloomberg) -- Advisers representing China Evergrande Group and a group of its offshore bondholders have taken what’s often a first step toward negotiations as the embattled developer faces a cash crunch, according to people with knowledge of the matter.

The ad hoc bondholder group’s advisers are seeking to exchange information with the company, including the status of various projects, liquidity and asset valuation, after earlier outreach attempts were rebuffed, said the people, who asked not to be identified because the talks are private. Since then, Evergrande’s cash problems have deepened after it scrapped talks to sell a stake in its property-management arm.

The creditors have been trying to engage with Evergrande since mid September, sending letters asking for information about the company’s situation and seeking assurances that management won’t sell offshore assets while debt solutions are being discussed.

The developer made an overdue interest payment on a dollar bond before a grace period expired and secured a three-month extension on its $260 million dollar bond issued by Jumbo Fortune. Investors are now eyeing the end of a grace period on another Evergrande dollar bond later this week.

Chinese regulators have urged developers to meet their offshore obligations, welcoming news to investors who are growing wary that they are low on the priority list for repayments amid the sector-wide shakeout.

The country’s authorities told billionaire Evergrande founder Hui Ka Yan to use his personal wealth to alleviate the company’s deepening debt crisis, though it’s unclear whether Hui’s fortune is big and liquid enough to make a meaningful impact, people with knowledge of the matter told Bloomberg this week. Meanwhile, local governments are monitoring Evergrande’s bank accounts to ensure company cash is used to complete unfinished housing projects and not diverted to pay creditors.

Hui recently pledged to scale down the company’s real-estate operations to focus on new energy vehicles, a tall order given that Evergrande has yet to deliver a single vehicle.