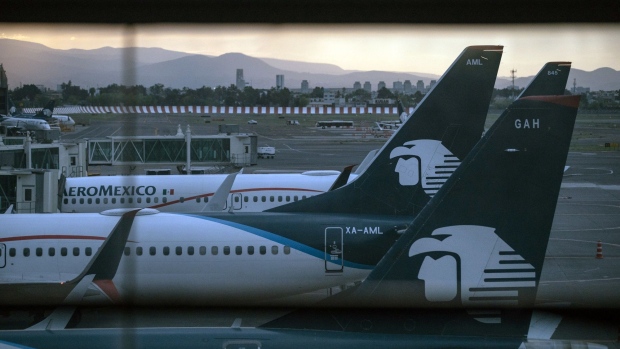 Grupo Aeromexico airplanes at Benito Juarez International Airport (MEX) in Mexico City, Mexico, on Tuesday, May 25, 2021. Mexico's aviation-safety ranking has been downgraded by the U.S., prohibiting an expansion of flights from the nations carriers to its northern neighbor. , Bloomberg

(Bloomberg) -- Grupo Aeromexico SAB cut a last minute deal with the main group of its unsecured creditors, easing the way for the airline to seek final approval to exit bankruptcy from a judge in New York.

The official committee of unsecured creditors in the company’s Chapter 11 case agreed to join more senior debt holders who back the plan, including Apollo Global Management Inc. and Delta Air Lines Inc. In return, unsecured creditors will get a note for $40 million.

The agreement means the only opposition the company faces to its proposal to slash $1.1 billion of debt is a smaller group of unsecured creditors lead by Invictus Global Management and Corvid Peak Capital Management. That group objects to the reorganization proposal, which would hand ownership stakes to senior debt holders Apollo and Delta.

The deal was announced at the start of a court hearing in Manhattan being overseen by U.S. Bankruptcy Judge Shelley Chapman. Chapman will hear final arguments about the proposal and then decide whether to approve the reorganization plan and allow Aeromexico to exit bankruptcy.

The plan would cut $1.1 billion of debt and hand Apollo and other top lenders an ownership stake. Apollo would also collect $150 million in cash. At the start of the bankruptcy, Apollo orchestrated a $1 billion rescue plan that helped keep the struggling airline afloat during its Chapter 11 case.

The hearing is likely the final courtroom showdown between the Invictus group and Aeromexico over the plan. Most creditors voted to support the proposal, according to court documents. The holdouts argue that the bankruptcy-exit plan undervalues the airline in order to benefit Apollo and Delta.

Aeromexico filed bankruptcy in 2020 during the pandemic.