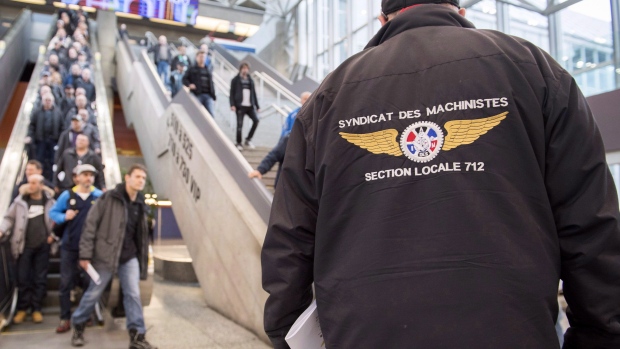 Bombardier aerospace employees leave a special meeting where the reviewed the partnership between the Quebec aircraft manufacturer and Airbus for the C Series in Montreal, Sunday, March 4, 2018. Aerospace workers are "sounding the alarm" to coax concrete commitments from federal parties and secure their sector's future in Canada. , THE CANADIAN PRESS/Graham Hughes

Aerospace workers are sounding the alarm over the future of the industry in the run up to the federal election, echoing their employers' warnings of an industry in peril of imminent decline.

In a new report released Monday, the International Association of Machinists and Aerospace Workers (IAMAW) warns about "the absence of a long-term vision" that could cause problems down the line despite the industry's healthy employment and output.

"At the moment, the aerospace ecosystem in Quebec seems in perfect health," reads the 130-page document. "Activity is abundant, demand for workers is high and the outlook is encouraging. However when we take a closer look, we find that an unprecedented storm could hit the industry very soon."

The report recommends implementing a pan-Canadian strategy to better co-ordinate industry efforts. "In short, it is time we take the destiny of our aerospace industry in hand," the study states.

The report -- titled "Propelling Quebec to new heights for a renewed commitment to aerospace" -- points to a looming labour shortage. The problem could be aggravated by Quebecers' "bad perception" of the aerospace sector and "prejudices" toward the trades, according to the IAMAW.

The study comes amid concerns over Bombardier's recent departure from commercial aviation after three decades in the sector and global aircraft production moving toward a duopoly dominated by Boeing and Airbus.

The same month, an industry report cautioned that Canadian aerospace is "at risk" of being overtaken by foreign rivals if Ottawa doesn't treat it as an "urgent priority" and work with the sector to buttress falling employment and GDP contributions.

"We need a heck of a lot more people in the industry," Charest told The Canadian Press in June. "We are clearly trying to influence the leaders of the next federal election campaign. We make no bones about that."

David Chartrand, head of the machinist union's Quebec chapter, echoed Charest's concerns this week, saying that other parts of the world are growing their aerospace sectors through "concrete action" while Canada lacks a comprehensive plan that co-ordinates regional efforts.

Chartrand added that a pan-Canadian strategy must help Quebec -- which houses half of the Canadian aerospace sector -- reinforce one of its "most important economic pillars."

In March, a study by the Canadian Aviation and Aerospace Council found that employees in that field are generally older than the average Canadian worker.

About one-third of Canada's aerospace workforce will retire within five years, resulting in a need for 55,000 new workers by 2025, according to the study.

"If we cannot fill these positions at a time when the industry is growing, we risk seeing companies forced to review their level of activity on Canadian soil for lack of available labour," warns the IAMAW.

The study proposes better co-ordination between educational institutions and business needs as well as mentoring programs to ensure transfer of knowledge between generations.

For workers who are already in the labour market of a rapidly changing field, the paper suggests fostering a "culture of continuous training" to prevent workers from being left behind amid layoffs.

Since 2012, aerospace employment and GDP contributions in Canada have declined five per cent and four per cent, respectively, according to the Department of Innovation, Science and Economic Development.

The industry furnished 213,200 jobs last year and injected $25.5 billion into the economy, but will need 50,000 more workers within the next few years, the Charest report stated, stressing the need for talent.

It called for a national system to co-ordinate co-op placements, fast-track immigration for skilled aerospace workers and partner with stakeholders to create national training centres.

The industry report also recommended launching a "national defence industrial strategy" and overhauling the procurement process to open it up to small business and industry giants alike.