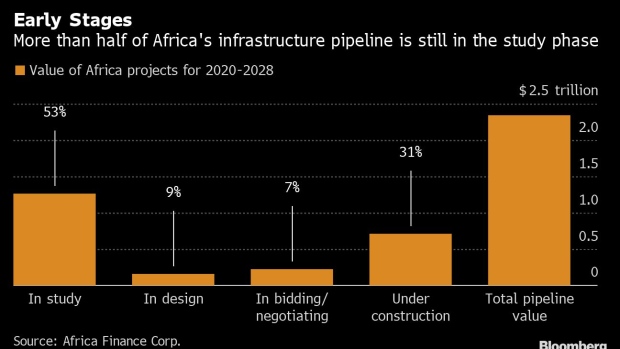 (Bloomberg) -- AFC Capital Partners plans to raise $2 billion to fund infrastructure projects in Africa that will make it more resilient to climate change.

The asset management company, a unit of the Africa Finance Corp., will raise an initial $500 million in its debut offering over the next year and the full amount over the coming three years, it said in a statement.

While Africa produces just 4% of the world’s greenhouse gas emissions, it is being hard hit by climate change and its response had been hamstrung by a lack of funds. In recent years, unusually strong cyclones have struck the southeast coast, droughts have parched southern Africa and floods and landslides have plagued the Horn of Africa.

AFC plans to invest the money in projects that reduce carbon emissions as well as building infrastructure more resilient to new weather patterns. The United Nations Conference on Trade and Development has estimated the continent’s infrastructure needs at at least $2.3 trillion of investment.

Between a quarter and a third of the initial $500 million will be sought from the Green Climate Fund as well as donor countries the AFC is in talks with, Zeinab Adam said in an interview. AFC, together with two private climate funds, will be asked to contribute around $150 million and the rest will be raised from private investors such as insurance companies, she said.

The equity will be subordinated so that private investors have first call on it when it is repaid.

“Longer term, we hope that we can tap the bond markets under a new label termed resilient bonds,” Zeinab Adam said. “We will hopefully put AFC on the map as a builder of resilient assets,” which could take three to five years, she said.

Initially investments will mostly focus on ports and other transport infrastructure, and on electricity transmission lines, which should ideally be buried underground to protect them from extreme weather, Zeinab Adam said. The aim is to build infrastructure that can withstand higher temperatures and rising sea levels.

Bridges, road and telecommunications could aslo be invested in.

Of the $2.3 trillion infrastructure pipeline on the continent, $715 billion worth of projects are under construction and the rest are either being studied, designed or negotiated. About $1.5 trillion is unfunded, according to the AFC.

Africa Finance Corp., which is based in Lagos, Nigeria’s commercial hub, was founded in 2007 to try and catalyze private-sector investment in Africa. It has invested $8.7 billion in 35 African countries to date.