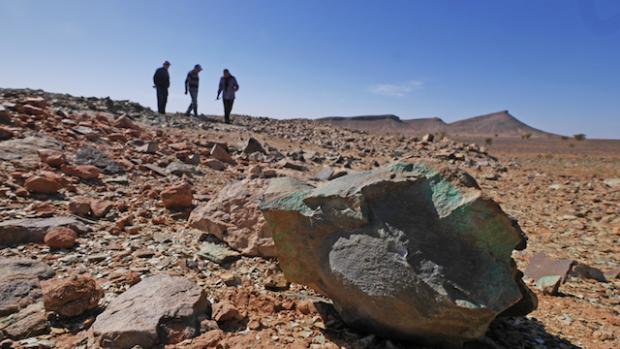 Copper is the third most used metal on earth, right behind iron and aluminum. Thanks to its exceptional properties, copper is quite literally all around us. It’s used in electricity, plumbing, electronics, high-tech, energy, construction, transportation and machinery, just to name a few.

With the epic worldwide shift to renewable energy and green transportation, the need for copper will continue to grow exponentially. Vast amounts of the metal will be required to generate and store electric power. The burgeoning shift to electric and hybrid vehicles has proved this, as they typically use double or more the copper of internal combustion engine vehicles.

According to the McKinsey Global Institute Report, copper demand could soar as much as 43 per cent over the next 15 years, as we move towards a low carbon and more sustainable future.

However, over the next two years, copper supply is expected to face sizeable deficits in the face of strong market fundamentals.

Large operating mines are already witnessing resources dwindling and slow production. Africa has strong potential for supplies, but much of that lies in challenging jurisdictions. That’s why quality projects in countries that are friendly to mining and business will command a premium.

“New copper production is assumed to come from Zambia and the Congo. But those are challenging jurisdictions. Trigon focuses instead on business-friendly African jurisdictions, like Namibia and Morocco.”

With large output for decades, South America is where much attention on supply has been focussed.

However, Chile has recently faced unrest as citizens protest the rising cost of living, meagre wages and pensions. Additionally, Peru has seen its copper production drop from 2017 to 2018 due to lower ore grades. South American mines are also depleting. Discoveries are becoming scarce and ore grades are falling. Several major projects are approaching the end of their mine lives, and political challenges are growing. Globally, the current pipeline of copper projects is at its lowest this century.

More than ever, the world needs sources of copper that can move from exploration and development to production, quickly and efficiently.

Weakening copper output from South America has analysts turning to the Congo as an alternative. While the Congo is known to have large reserves, challenges abound.

Ranked 183th out of 190 in the World Bank’s 2016 Ease of Doing Business Index, the Republic of Congo faces major corruption, very limited infrastructure, a poorly trained workforce and a deficient legal system.

That’s why Trigon Metals Inc. (TSXV: TM), a promising play on copper, carefully chooses where it does business, focussing on places with stable governments, friendly mining laws and a skilled labour force.

The company’s flagship project is the Kombat Mine located in Namibia, a country known as one of the best places in Africa for mining. Stable, democratic and mining-supportive, Namibia boasts a long history with mining, which is responsible for 25 per cent of the country’s revenue.

Kombat is one of the most significant copper mines in Namibia. It originally started producing in 1962, operating until 2008, with total output reaching 12.46 million tonnes of ore grading 2.6 per cent copper on average.

Today the mine boasts extensive infrastructure and is ready to be restarted.

“The Kombat Mine is shovel ready with all environmental permitting in place. Our mining licence is still active, and the renewal application is currently under review by the Ministry of Mines in Namibia. We do not foresee any challenges with the renewal process.”

The Kombat mine has over USD$100 million worth of usable infrastructure in place. That includes a 1,100 tonne/day mill and headframes.

The goal is to execute the mining plan in phases.

For Phase 1, Trigon has completed a Feasibility Study to restart the Kombat Mine from its open-pit resource. That produced a highly robust Internal Rate of Return (IRR) of 103.4 per cent at $3.10 copper, requiring USD$7.4 million of CapEx.

Phases 2 and 3 will use USD$5.7 million of free cash from Phase 1 to fund the recommissioning and exploration underground. Trigon expects to mine 3 million tonnes over 5 years at a rich copper grade of 3.29 per cent. That leads to an IRR of 63.9 per cent and an NPV (10 per cent) of USD$83.9 million, with a cash cost of USD$1.36/lb of copper equivalent.

Trigon is pursuing growth through organic and acquisitive opportunities, aiming to become a mid-tier copper producer.

Organic growth is likely to come from surface and underground production at the Kombat Mine, while substantial exploration upside exists within the existing Kombat licence areas.

Growth may also come from exploration potential in the Kombat Trend and merger or acquisition opportunities in Namibia.

One of Trigon’s most exciting recent developments is its impending agreement to acquire the Silver Hill high-grade copper and silver project in Morocco. Silver Hill is located in the Anti-Atlas region, home to Africa’s major silver mines.

What’s more, Morocco is widely recognized as a favourable mining jurisdiction, producing 40 million tonnes of minerals annually and 90 per cent of the world’s supply of phosphates and extracts of copper, cobalt, gold, silver, and zinc. The mining sector also creates over 41,000 direct job positions.

The promising upside at Silver Hill comes from exceptionally high-grade samples collected from three mineralized structures that have been identified. The uppermost structure has been traced laterally for more than 5 km. Grab samples from this structure range in grade from 3.17 per cent to 10.16 per cent copper and 179g/t to 750g/t silver.

Copper demand is set to rise significantly in the coming years, while sourcing new supply will be challenging, especially from traditional areas. Africa holds some of the most promising copper prospects, but miners need to be highly selective about jurisdictions.

Trigon Metals has the right projects in the right places to profit from rising global demand in copper.