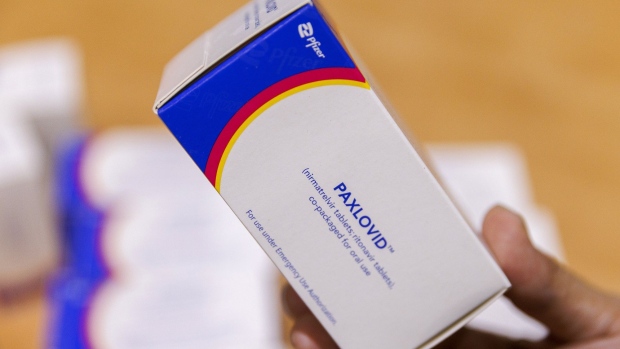 Boxes of Pfizer Inc.’s Paxlovid antiviral medication arranged in a warehouse in Shoham, Israel, on Jan. 18, 2022. A fourth dose of the Pfizer-BioNTech vaccine was insufficient to prevent infection with the omicron variant of Covid-19, according to preliminary data from a trial in Israel released Monday. Photographer: Kobi Wolf/Bloomberg , Bloomberg

African health officials aim to reach an agreement to obtain Pfizer Inc.’s Covid-19 pill within weeks, which would bring a key virus-fighting tool to the continent.

“If you have such drugs, people can test and treat themselves at home and not overwhelm the health system,” John Nkengasong, director of the Africa Centres for Disease Control and Prevention, told Bloomberg’s The Year Ahead conference. “That is why treatments are very important.”

Africa is seeking supplies of Pfizer’s Paxlovid amid concerns that less wealthy countries could be left behind as they have been with vaccines, despite licensing agreements to broaden availability of Covid medicines. Merck & Co. said Tuesday it will supply the global relief organization Unicef with up to 3 million courses of molnupiravir, developed with Ridgeback Biotherapeutics LP.

Nkengasong said he’s “optimistic that in the coming month, hopefully by the end of next month, we will be very close to making an announcement.” He didn’t elaborate on what form it would take. Pfizer didn’t immediately respond to a request for comment.

Pfizer and Merck have each agreed to allow generic manufacturers to make inexpensive versions of their pills for low- and middle-income countries. But demand for antiviral drugs is set to outpace supply, with poorer countries potentially waiting until early 2023 for generic-drug makers to produce large quantities, an analysis from London-based Airfinity Ltd. found.

Pfizer, whose drug sharply reduced hospitalizations and deaths from Covid in human trials, said in December that its goal is to deliver the therapy to patients most in need as soon as possible and at an affordable price, subject to country regulatory authorization.

African officials are also working to scale up access to Covid vaccines with only 10% of the continent fully vaccinated and some countries facing hurdles in their campaigns to get shots into arms. The World Health Organization has drawn up a list of 20 countries on the continent that are at high risk of missing a target of vaccinating 70% of their populations later this year.

“Unless we get to that level, the continent has an unpredictable and uncertain trajectory for this pandemic,” he said.

Nkengasong told reporters last week that the Africa CDC was in talks with Pfizer about importing Paxlovid. Boosting testing capacity is also crucial amid efforts to make new therapies available, he told Bloomberg. Health groups are pushing for increased testing in lower-income nations to detect cases in the first days of infection, when antivirals could be most effective.