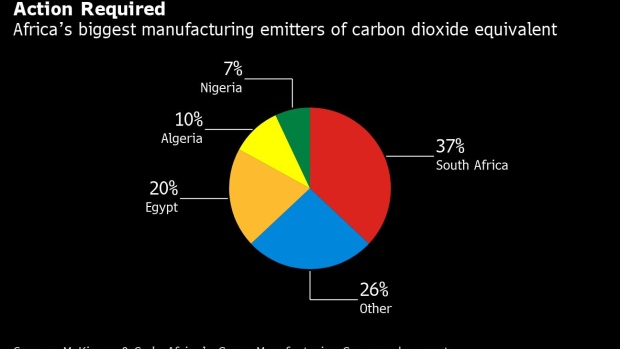 Africa’s lack of industrial development puts it in a strong position to develop low-carbon manufacturing without the costs of transitioning from fossil fuel-based factories, McKinsey & Co. said.

In the process of striving toward net-zero emissions by 2050, the continent could create a net 3.8 million jobs, McKinsey said in its Africa’s Green Manufacturing Crossroads report, which was partially funded by the U.K. government and released Monday. However, to hit that level would require investment of $2 trillion in manufacturing and power.

“Africa has an opportunity to leapfrog high emitting manufacturing technologies and build a low-carbon manufacturing sector from the ground up,” Kartik Jayaram, a senior partner in McKinsey’s Nairobi office, said in a statement accompanying the report. “Africa could avoid future costs by sidestepping the expensive transition from fossil fuels to renewables.”

Still, without any commitments to decarbonize emissions from manufacturing, Africa could almost double to 830 megatons of carbon dioxide equivalent by 2050, McKinsey said.

“To change this trajectory, decisive action would be needed,” McKinsey said.

Of the 440 megatons of carbon dioxide equivalent currently produced by African manufacturing, almost a third comes from cement and 13% is emitted by coal-to-fuel plants, which are operated by Sasol Ltd. in South Africa, the consultancy said.

To fund the development, African countries would need to tap green finance instruments such as carbon credits, green bonds, green insurance and payment for performance linked to green outcomes, Mckinsey said.  To decarbonize existing industries, $600 billion would be needed while $1.4 trillion is needed for new green businesses, the consultancy said.

Carbon capture and storage and the production of green hydrogen are two technologies that could help the continent attain the target, it said.

New industries that could be developed range from bioethanol and cross-laminated timber to electric vehicles and green hydrogen, McKinsey said.