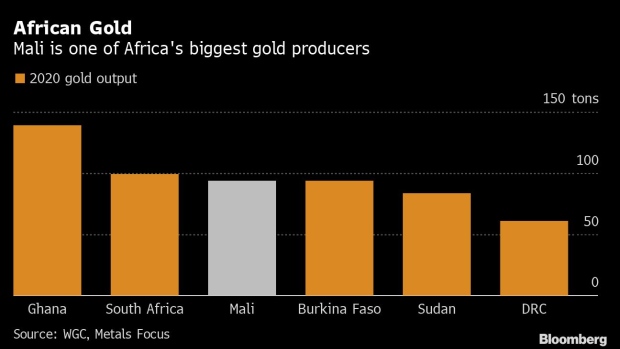 Mali is getting closer to bringing in new rules to better control artisanal gold mining and overtake South Africa as the continent’s second-biggest producer.

The country has struggled to keep tabs on informal output that’s sold on the black market or smuggled out, and gold is also being illegally funneled through the nation from its neighbors. While a mining code that came into force in late 2020 set out plans to overhaul the sector, no measures were implemented.

That’s now changing. The government plans to require permits for small-scale miners and set up 200 cooperatives with the help of the World Bank as part of a move to formalize trade by middlemen. Also, Barrick Gold Corp. will assist in allocating land for those workers to formalize sales, Mining Minister Lamine Traore said in an interview. Those changes -- being worked on into 2022 -- could see Mali’s total output rise 15%, he said.

It’s the latest move by an African nation to maximize earnings from their gold resources as the metal trades within 15% of a record high. In recent years, Ethiopia has channeled sales through the central bank to curb smuggling, while Nigeria announced plans to shift informal production into a supervised supply chain. Also, Tanzania introduced trading centers to reduce illegal exports.

“We can go from being the third-biggest producer of gold to being the second-biggest in Africa,” Traore said by phone from Bamako.

Authorities estimate that Mali loses as much as 15 tons a year -- equal to about $860 million at today’s price -- from artisanal gold production that’s smuggled out of the country. Its favorable export taxes also encourage supplies to illegally enter the country before being shipped on.

“Mali could significantly increase output if it had better control over production and exports from the artisanal mining sector,” Abdoulaye Pona, the head of the Mining Chamber, said in a separate interview.

Artisanal gold mines in West Africa’s Sahel region including in Mali have become a source of revenue and recruits for Islamist militants as they secure sites or levy illicit taxes, the International Crisis Group has said. Mali’s industrial mining areas have largely been spared from the violence, though there have been sporadic attacks, most recently near the border with Mauritania that targeted a convoy taking equipment to a mine in the southwest.

“Mining, mostly for gold, is a pillar of the country’s economy, accounting for almost 10% of gross domestic product,” Traore said. “Clearly the security issue is something we can’t ignore.”

As well as Barrick, companies with operations or assets there include B2Gold Corp. and Endeavor Mining Corp. Mali also has untapped resources or deposits of commodities such as lithium, a key metal used in electric batteries, and iron ore.