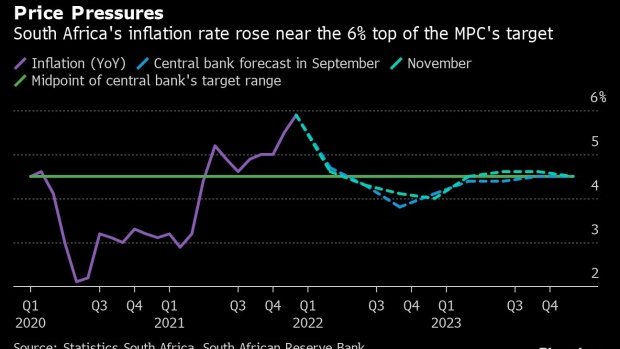 (Bloomberg) -- Central banks in some of Africa’s biggest economies will likely look past high inflation and U.S. policy tightening and hold interest rates over the coming weeks to shore up their recoveries from the Covid-19 stasis.

Since monetary policy makers on the continent last met, U.S. consumer prices soared to a near four-decade high, setting the stage for the Federal Reserve to begin hiking interest rates as soon as March, which could lead to a sell-off of emerging-market currencies and dollar bonds in nations with high debt.

Price growth in Nigeria, Ghana, Angola and Zimbabwe that was already in double-digits has accelerated, stoked by rising food and oil prices. Even so, most major central banks are set to prioritize supporting fragile economies over taming price growth by leaving key interest unchanged in the coming days.

Africa’s “growth recovery is a lot slower and weaker, and implies that central banks have to be a lot more cautious when it comes to the tightening,” said Yvonne Mhango, Renaissance Capital’s head of research for the continent. She also cautioned that its nations lacked the resources to provide the level of fiscal stimulus that helped developed markets like the U.S. recover faster.

Borrowing costs are only expected to rise in South Africa, whose liquid capital markets make it vulnerable to tightening by developed market central banks; and Zimbabwe, which is contending with an inflation rate of more than 60% and a sliding currency.

Here’s what central bankers in Africa may do:

The Central Bank of Nigeria will likely keep its key rate at a six-year low despite a surprise uptick in inflation in December.

Governor Godwin Emefiele signaled in November that the monetary policy committee’s existing stance should “continue for a little longer” to stabilize prices and buttress economic growth.

“We see the CBN raising the policy rate by 150 basis points in 2022, but for this tightening to be delivered in the second half of the year,” said David Faulkner, economist at HSBC.

Eight of the nine economists in a Bloomberg survey expect rates to remain steady and one sees a 100 basis points increase.

The Banco de Mocambique will probably hold its benchmark interest rate, a year after surprising with a 300 basis-point hike, to ensure a durable economic recovery.

That’s as the central bank sees inflation, which slowed for the first time in six months in December remaining below 10% in the short- to medium-term, supported by the stabilization in its currency.

The metical has been trading at 63 to the dollar since June, after a topsy-turvy performance that caused headaches for exporters and importers.

Monetary policy makers in Kenya are expected to keep borrowing costs unchanged for a 12th consecutive meeting, after inflation softened to an 11-month low in December, allowing the real rate to widen.

“Increasing the rate would have a negative ripple effect given that the economy and businesses are still recovering,” said Ann Wacera, a senior investment analyst at Nairobi-based Cytonn Investments.

South Africa’s central bank is likely to continue its hiking cycle and raise its benchmark repurchase rate by 25 basis points. That’s even as the economy reels from the impact of a fourth wave of omicron-driven coronavirus infections, which saw several nations sever air ties with Africa’s most industrialization nation.

The move will be driven by an upward revision to its inflation forecasts and oil price assumptions after price-growth surged to a near five-year high in December, said Elize Kruger, an independent economist. Raising the key rate will help keep inflation expectations anchored close to the 4.5% midpoint of the central bank target’s range, preserve the appeal of local assets to offshore investors and act as an “insurance policy” against interest-rate normalization by developed market central banks, she said.

Angola is likely to keep borrowing costs steady after a 450 basis points increase in July, the most aggressive move among global central banks tracked by Bloomberg. That’s as it expects easing supply bottlenecks and a suspension of import duties to help tame price growth.

Leaving the rate unchanged would also allow last year’s policy move to filter through the economy, said Wilson Chimoco, economist at the Catholic University of Angola.

The central bank should stand ready to raise the key rate even further if price pressures rise or high inflation expectations become entrenched, the International Monetary Fund said in a statement this month.

Zimbabwe’s central bank is expected to continue its aggressive monetary-policy tightening in 2022 after lifting the main rate to 60% from 40% in October to arrest high inflation and a declining currency.

“The Reserve Bank of Zimbabwe has rightly diagnosed the problem which they face, which is how to stabilize the exchange rate, which is the main driver of inflation, rather than interest rates,” said Tony Hawkins, an economics professor at the University of Zimbabwe. While it’ll lift its key rate that won’t be enough to “catch up with inflation,” he said. He expects the inflation rate to top 100% this year.

The Zimbabwean dollar has plunged by almost a third since September. That’s due to an unrelenting increase in money supply, high levels of imports and long delays in settlement at the central bank’s weekly currency auction, according to the Confederation of Zimbabwe Industries, the country’s largest business lobby group.

The MPC, which meets Jan. 28, will release its interest-rate decision by Feb. 8.

Policy makers in Ghana are expected to keep borrowing costs unchanged even as inflation breached the ceiling of the central bank’s target range for a fourth consecutive month.

The West African nation’s government debt has been trading at distressed levels since Jan. 6, signaling that investors judge that re-financing debt in the Eurobond market won’t be an option when the Fed hikes rates and as budget targets remain elusive.

To reassure investors, Minister of Finance Ken Ofori-Atta said last week that the government is willing to cut spending by as much as 20%, depending on revenue performance, to stabilize public finances.

A hike in the policy rate now will further increase the cost of credit, undermine an already fragile fiscal situation, and call into question financing costs and debt sustainability, Martey said.

Egypt kept one of the world’s highest inflation-adjusted interest rates unchanged last year and it’s unlikely to shift course in the first half of 2022 while local inflation remains tamed and the pandemic rattles the global economy.

While emerging markets are facing pressure to raise rates due to Federal Reserve tapering, Egypt can probably hold firm without jeopardizing a differential between key policy rates and inflation that’s the highest among more than 50 economies tracked by Bloomberg. That kind of ranking has made its Treasury bills and bonds a favorite for international investors in search of healthy yields.

Egypt “maintains adequate real and nominal rates to keep its carry trade attractive especially amid more vulnerable positions for other key competitive markets,” said Mohamed Abu Basha, head of macroeconomic research at Cairo-based investment bank EFG Hermes. He sees a 15% to 20% chance for a hike of 100 basis points in the second half of 2022 if inflation accelerates beyond the year’s projected average of 7%.

Zambia’s central bank will likely keep its key rate unchanged after inflation slowed to a 14-month low and as it waits to assess the impact of a 50 basis points rate hike in November and the removal of fuel subsidies.

Monetary policy makers are forecast to hold interest rates until the economic program deal with the IMF is finalized, said Trevor Hambayi, a Lusaka-based independent economist.