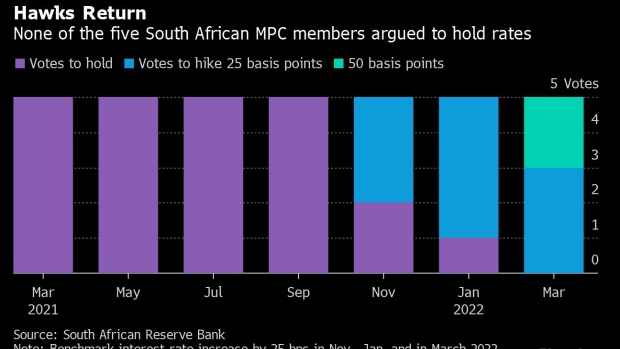 Central banks in five of eight major African nations will likely hold interest rates in the next two weeks to shore up their sickly economies, even as inflation pressures build.

Surging food and fuel prices from the war in Ukraine, renewed virus lockdowns in China and the US unwinding coronavirus stimulus have clouded the outlook for the continent’s post-Covid recovery. African policy makers will also need to consider portfolio outflows and exchange-rate weakness in emerging markets when they deliberate on interest-rate decisions this month.

Countries like Kenya, Zambia and Angola where inflation is slowing or within target may leave rates unchanged to help support economic growth. Others -- such as South Africa -- that are more connected with global markets through asset flows and commodity prices are likely to hike, according to Tatonga Rusike, sub-Saharan Africa economist at Bank of America.

Here’s what central bankers in Africa may do:

Policy makers at the Bank of Zambia have been focused on driving inflation back to within target by next year. With the gauge slowing for a ninth straight month in April to a two-and-a-half year-low, the monetary policy committee will probably stand pat, said Trevor Hambayi, a Lusaka-based independent economist. That will support the economy’s recovery and may boost the kwacha, which has strengthened 4.5% against the dollar since April, helping to offset price pressures from rising gasoline and wheat costs.

The MPC will probably keep borrowing costs on hold until Africa’s second-largest copper producer secures a bailout from the International Monetary Fund allowing it to drive its economic agenda, which would require increased liquidity and open the door for a rate cut, Hambayi said.

After Egypt hiked its key interest rate for the first time in five years in March, more may be on the cards as the North African nation faces a spike in consumer prices and a hawkish US Federal Reserve affects capital flows.

Annual inflation hit its highest level in almost three years in April as food costs soared by about a quarter. That meant both Egypt’s policy rates turned negative, when adjusted for prices, for the first time since 2018, undercutting a high differential that had made the country a favorite for overseas portfolio investors.

To contain inflation and compete with other emerging markets, Egypt’s central bank may raise rates by as much as 200 basis points this month, said Radwa El-Swaify, head of research at Cairo-based Al Ahly Pharos. “Global monetary tightening is a crucial factor in this decision,” she said.

South Africa’s central bank will raise its benchmark interest rate this week. The only question is “by how much?”

While the South African Reserve Bank lifted the key rate by 25 basis points in each of its last three meetings, two out of five MPC members voted for a bigger, half-point hike in March. Now, more of the panelists may agree to up the pace of tightening due to inflation that’s set to temporarily breach the ceiling of Reserve Bank’s target, a weaker currency, and a more hawkish US Federal Reserve and European Central Bank.

“Our view has changed and we now see a 50 basis point hike in May,” said Mpho Molopyane, an economist at FirstRand Group Ltd.’s Rand Merchant Bank. Capital outflows and heightened rand weakness since the Fed’s upward move are also among the factors that will influence decision-making, she said.

Of the 20 economists in a Bloomberg survey, five predict an 25 basis point increase, with the rest expecting a half-percentage-point hike.

Absa Group Ltd. analysts Ridle Markus and Samantha Singh expect the central bank to raise the benchmark interest rate by 200 basis points as they forecast inflation to exceed the MPC’s estimates after accelerating at a faster than anticipated pace in March and April.

Patrick Asuming, a senior lecturer at the University of Ghana Business School, projects the MPC will leave the rate untouched to support growth after a 2.5 percentage point increase in March, the biggest hike since at least 2002. “Policy rate hikes are not the real solution because inflation is driven largely by supply-side factors, hence, the central bank’s hiking of rates is just a battle in futility,” he said.

Still, Razia Khan, head of research for Africa and the Middle East at Standard Chartered Bank, warns that “failure to act soon could have far reaching implications, putting at risk any hopes for quick macroeconomic stabilization.”

The Central Bank of Nigeria’s reconstituted MPC will probably stick to its policy of only making adjustments to borrowing costs once the economy’s recovery is on a sustainable path. That should see it leave the benchmark interest rate steady for a 10th consecutive meeting, even as inflation has been ticking up this year.

Choked supply chains, partly due to Russia’s invasion of Ukraine, and surging diesel costs are placing upward price pressures on Africa’s largest economy. They are also hindering its recovery, as are security challenges in its northern food-growing regions and persistent oil production troubles.

“The CBN has consistently maintained a dovish monetary stance in the face of structural and policy-induced headwinds, and if anything, the souring of the global macroeconomic environment will only incentivize it to double down on holding rates,” Ikemesit Effiong, head of research at SBM Intelligence, said in response to emailed questions.

Rate setters in Mozambique will probably keep the benchmark unchanged to assess the impact a two percentage point hike in March and the IMF’s approval of a $456 million bailout deal this month will have on inflation that accelerated to a 54-month high of 7.9% in April.

The IMF sees annual inflation ending the year at 9% and said May 10 that the Banco de Mocambique’s “prudent monetary policy stance is warranted.” Previously, it had criticized the central bank for raising rates too aggressively.

Kenya’s MPC is expected to look past inflation that has edged closer to the top of its target range and the shilling’s weakness and keep its rate unchanged for a record 14th straight meeting to support lending ahead of elections on Aug. 9.

Voting-related uncertainty often prompts a slowdown in Kenya’s credit growth, and the central bank will opt for a gradual pace of tightening despite foreign-exchange pressures and rising commodity prices, Khan said.

“We now expect the policy rate to stay on hold until the September meeting; we had previously expected the post-Covid tightening cycle to start in March,” she said in an emailed note.

Angola’s monetary authority is likely to keep borrowing costs steady as a rally in the kwanza against the dollar is helping to rein in inflation. Governor Jose de Lima Massano said this month he expects inflation, which reached a peak in January, to slow further.

The central bank is also seen easing custody fees and the liquidity absorption facility to increase the supply of its currency, Wilson Chimoco, economist at Universidade Catolica de Angola said. A scarcity due to excess supply of foreign exchange has meant less money “to support the financing needs of public expenditure in kwanzas and for economic growth” in 2022, he said.