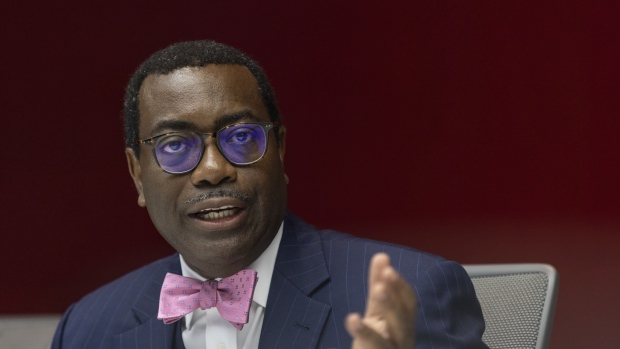 Pedestrians pass by headquarters for the African Development Bank (AfDB) in the Plateau business district of Abidjan, Ivory Coast, on Monday, May 16, 2022. Surging international food prices will hit Africa’s economies the hardest and may trigger social unrest if governments fail to cushion the blow, according to a report by Oxford Economics Africa. Photographer: Andrew Caballero-Reynolds/Bloomberg , Bloomberg

(Bloomberg) -- The African Development Bank has suggested a plan to South Africa that will help the nation use the $8.5 billion in climate financing pledged by some of the world’s richest nations to raise even more funds.

The AfDB has recommended that South Africa park the funds in a special purpose vehicle, bank President Akinwumi Adesina. The SPV, which can seek a credit rating, can sell zero-coupon bonds to raise as much as $41 billion, Adesina said in an interview Thursday in Bloomberg’s New York office.

The US, UK, Germany, France and European Union plan to provide $8.5 billion to South Africa to help the country cut its use of coal, which is used to generate more than 80% of its electricity. The world’s 13th-biggest producer of greenhouse gases will need to spend $250 billion over the next three decades to fund the closing down of coal-fired power plants, develop green energy sources and an expanded electricity grid, according to a study released in May.

South Africa is working on a plan to access the funds, which will be a combination of grants, concessional financing and potentially guarantees. The structure of the funding arrangements, which may be on a project-by-project basis, could make it impossible to use an SPV structure.

AfDB’s proposal has got little support from South Africa or the funding partners, according to people with knowledge of the matter.

The funding pledge, which will be made available over three to five years, was announced at the COP26 climate talks in Glasgow in November.