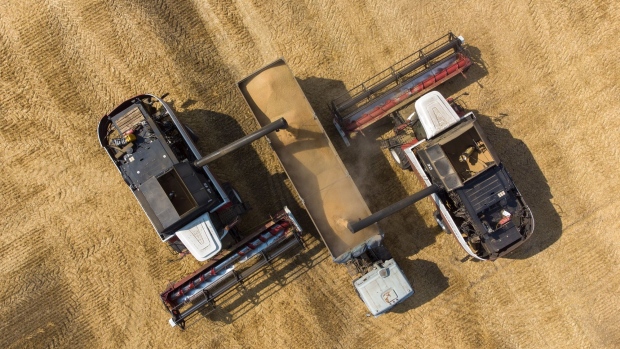 Acros combine harvesters, manufactured by Rostselmash OJSC, unload harvested wheat grain into a truck during the summer harvest on a farm in this aerial photograph taken in Tersky village, near Stavropol, Russia, on Friday, July 9, 2021. Farmers from Kansas to Kyiv are gearing up to collect abundant wheat crops in coming weeks, helping ease a global grain shortfall that’s fueled a surge in prices. , Bloomberg

The African Development Bank will use the facility to supply about 20 million farmers with climate-smart certified seeds and fertilizer. That’ll facilitate the rapid production of 38 million tons of food -- including wheat, corn, rice and soybeans -- equivalent to a $12 billion increase in output over two years, the Abidjan-based lender said Friday in a statement sent by WhatsApp.

“The African Emergency Food Production Facility is designed to boost the local production of cereals and oil grains as the most effective and efficient way to build the resilience of Africa’s food systems” to respond to war-induced prices increases and lessen risks to supply in the short- to medium-term, the lender said.

The war in Ukraine and sweeping sanctions imposed on Russia have upended grain shipments at a time when global stockpiles were already tight, raising the risk of a full-blown hunger crisis. Together the two nations produce more than a quarter of global wheat exports, and the United Nations has warned that already high food costs could surge another 22% as the fighting stifles trade and cuts future production.

African countries face a shortage of at least 30 million tons of food due to disruptions triggered by the war and there is a 2 million-ton fertilizer-supply gap on the continent, the AfDB said.