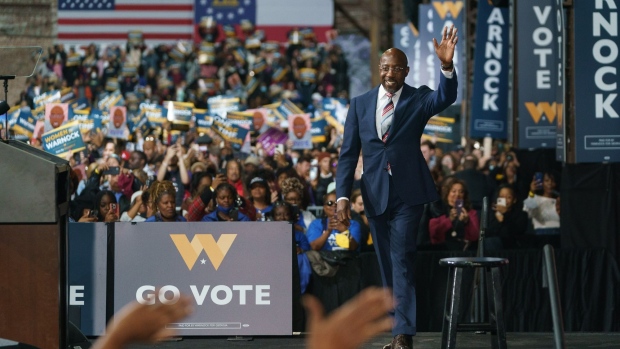 Raphael Warnock during a campaign rally in Atlanta, on Dec. 1. , Bloomberg

(Bloomberg) -- Georgia voters Tuesday will decide whether to send Senator Raphael Warnock, a Democratic incumbent, back to Washington for a full six-year term or instead elect Republican Herschel Walker in the second consecutive runoff election for the seat in less than two years.

Polls show Warnock with a slight lead over Walker, a former University of Georgia football star who was handpicked by former President Donald Trump. Neither of the two men reached the 50% threshold required to avoid the runoff in the Nov. 8 election, due in part to a third-party candidate who won’t appear on Tuesday’s ballot.

As of Monday, a record 154,176 early voting ballots had been accepted, according to Gabriel Sterling, chief operating officer for Georgia’s Secretary of State. Rainy weather may hamper Election Day turnout, which generally favors Republicans.

Polls indicate a close contest with high turnout. That means that while polls close at 7 p.m. New York time, it could take some time before a winner is called.

Warnock and his allies have thoroughly outspent Walker and his supporters. Warnock and allied groups have spent $58 million to blitz Walker on the airwaves. That compares to the $28.1 million spent by Walker and his backers, according to AdImpact.

Walker made a short stop Tuesday morning at the popular 24-hour Marietta Diner in suburban Cobb County, walking its perimeter and clutching supporters’ hands while deflecting media questions about character, an issue that has dogged his campaign.

“Right now, I’ll put my character against Raphael Warnock any day,” Walker said. “Atlanta right now shows that they don’t care about all this Black and White. They care about voting.”

Trailing Walker was well-known political consultant and former Christian Coalition leader Ralph Reed, who told Bloomberg that Warnock’s highlighting of allegations that Walker pressured former partners to have abortions and abused an ex-wife, were “gutter” politics that Georgians will reject.

Warnock, meanwhile, visited Norcross, a different Atlanta suburb on Tuesday. He urged supporters to cast ballots and not take his slight lead in polls for granted.

“The truth is my opponent could still win this election, because there is a path. More of our voters tend to vote during the early period and more of his voters tend to vote on Election Day. So if you haven’t voted by all the means, vote,” Warnock said.

A better-than-expected midterm performance by Democrats kept President Joe Biden’s party in control of the 50-50 chamber with Vice President Kamala Harris’s deciding vote. But a 51-seat majority would give Democrats an advantage on key committees and make it easier for Biden to make nominations, including within the judicial branch.

Republicans, on the other hand, could use a moral victory after their lackluster midterm showing. They’re also keen to demonstrate that Georgia is still a Republican state, evidenced by GOP Governor Brian Kemp’s resounding reelection, and that 2020 was an anomaly. Both parties are looking to use the runoff as momentum for the 2024 presidential campaign.

A Democratic triumph would solidify Georgia’s metamorphosis from a Republican stronghold to the quintessential battleground state. A Warnock loss means Democrats will have to redouble efforts there in 2024, especially since Republican Governor Ron DeSantis’s blowout victory in neighboring Florida has all but taken that state off the table.

Moreover, holding the Senate portends to be a tougher slog for Democrats in 2024 with Joe Manchin of West Virginia, Montana’s Jon Tester and Sherrod Brown, of Ohio, all Democrats in GOP bastions, up for reelection.

(Updates with details from Warnock on the trail in ninth paragraph)