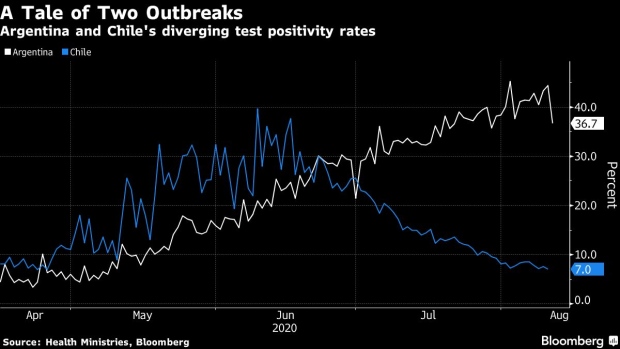 (Bloomberg) -- Argentina’s coronavirus fight is taking a turn for the worse as the nation that implemented one of Latin America’s strictest lockdowns sees deaths surge anyway.

South America’s second-largest economy reported 303 Covid-19 deaths in the past 24 hours, a record that was double the prior day’s tally. It’s quickly climbing in the ranks among the deadliest outbreaks over the past week on a per capita basis. In the past seven days, Argentina reported 22.5 deaths per million people compared with 28.1 in Brazil and 23.4 in the U.S., the world’s biggest hot spots. Total deaths have now surpassed 5,000 since the pandemic began.

Worse still, concerns are mounting that real case and death tallies may actually be much higher. The number of coronavirus tests coming back positive has been hovering around 40% for the past week, similar levels to Mexico where testing levels have been deemed insufficient. The World Health Organization recommends that countries aim for 5% or less for 14 days straight before reopening economies.

The worsening outbreak stands at odds with a government that seemed to do everything right as soon as the pandemic started racing around the globe. Argentina has one of the world’s longest and strictest nationwide lockdowns -- now at 146 days. The government restricted movement so heavily that citizens can’t even cross provincial borders, either by air or car, without facing scrutiny and possible fines.

The economy is expected to contract about 10% this year -- the third-consecutive year in recession -- and the government will begin talks soon with the International Monetary Fund on a new program after striking an initial debt restructuring deal on $65 billion of bonds.

The epicenter of the virus remains the province of Buenos Aires, which had 64% of all cases as of Wednesday. The province, Argentina’s biggest and most-populous, at one point offered to pay citizens with mild cases to isolate. The capital city of Buenos Aires has 17% of nationwide cases.