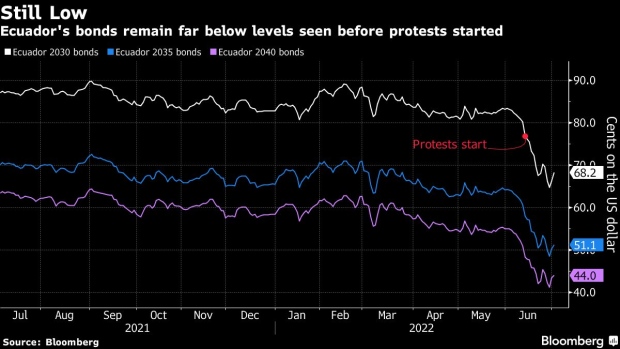 (Bloomberg) -- Life is getting back to normal in Ecuador after protesters agreed to end a wave of violent demonstrations that had paralyzed much of the country. Don’t expect the nation’s bonds to return to their former level any time soon though.

Even after President Guillermo Lasso survived an impeachment attempt last week, investors remain worried that the former banker won’t last until his term ends in 2025, triggering another debt crisis. Their jitters are understandable. Ecuador has defaulted eleven times in less than 200 years of independence, the last one just two years ago.

While the nation’s sovereign bonds pared some losses last week after the government reached an agreement with representatives of indigenous organizations to end more than two weeks of nationwide protests over fuel prices and the high cost of living, the notes remain far below the 64 cents they were trading at before the unrest. And they’re unlikely to reach that level again any time soon, according to investors and analysts.

“The concern is whether Lasso finishes his term,” said Zulfi Ali, a senior portfolio manager focused on Latin America at PGIM Fixed Income in Newark. “And if he doesn’t finish his term, then you have new elections and new elections could throw up a whole new set of candidates and we don’t know what their agenda is going to be.”

Last month’s protests brought back memories of social unrest in 2019 that forced then President Lenin Moreno to relocate his government to the coastal city of Guayaquil and paved the way to the 2020 default. His fate was not uncommon in Ecuador. From 1997 to 2006, no elected president completed their four-year term.

“The past weighs heavily on” Ecuador, said Alejandro Arreaza, an economist at Barclays in New York. “If they don’t break those perceptions, crises become a self-fulfilling prophecy.”

Ecuador bonds were the worst performers in emerging markets last month after Lebanon, which hasn’t paid creditors in over two years, and war-torn Ukraine, which is said to be exploring restructuring options. The debt slumped 21% as protests slashed output of crude oil, the former OPEC member’s main export. That compares to a 6.3% decline in a Bloomberg index of sovereign notes from the developing world.

The political instability will probably keep Ecuador from reaping the full benefits of high oil prices as the government ramps up social spending, analysts Fernando Losada, Omar Zeolla and Thomas Jackson at Oppenheimer & Co. Inc. wrote in a research report on June 30.

To put an end to protests, the government agreed to increase subsidies by more than 10% to $3.4 billion. As a result, Ecuador will probably have to renegotiate targets with the International Monetary Fund before a final disbursal expected this year.

In addition to these changes to economic policy, Simon Cueva, the finance minister who managed the relationship with the IMF and was a critic of fuel subsidies, will be replaced, with his successor to be announced later on Tuesday amid a broader cabinet shakeup.

“Unfortunately the country ended up being in the eye of the storm,” said Joe Delvaux, an emerging-markets distressed debt portfolio manager in London at Amundi. “This just adds uncertainty.”