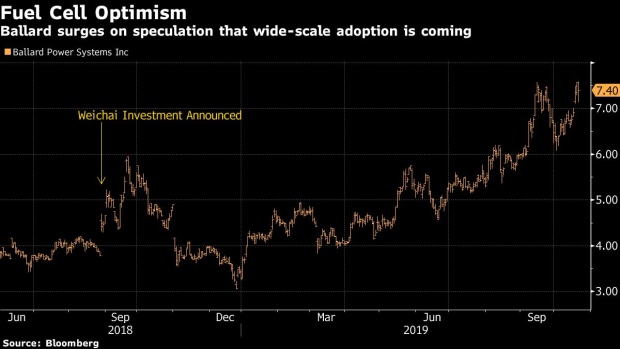 (Bloomberg) -- Canadian hydrogen fuel-cell pioneer Ballard Power Systems Inc. has hung on for four decades without posting a profit, waging a battle far head of its time against the combustion engine.

It says its moment may finally be arriving.

Fuel-cell and hydrogen costs are falling, while emissions rules are tightening. That’s broadening the appeal of a technology that allows vehicles to run on the universe’s most abundant element, releasing only water and heat as byproducts.

“There’s been a real change over the last 12 months,” said Randy MacEwen, chief executive officer of Ballard, based in Burnaby just outside of Vancouver. In parts of Europe, operating a fuel cell-powered electric bus is now cost competitive with a traditional fuel-burning version, he says. Use of the technology is diversifying into ships, trains and forklifts.

Ballard is the second-best performing stock on Canada’s benchmark S&P/TSX Composite Index this year, pushing its market value to C$1.7 billion ($1.3 billion). It’s more than doubled after scoring a Chinese investor and burgeoning speculation that wide-scale adoption of hydrogen fuel cells may at long last be around the corner.

A string of deals this year have indicated the technology is penetrating the traditional automotive industry:

“I think the understanding of the value proposition is much stronger today,” says MacEwen, referring to the edge that hydrogen has particularly in commercial vehicles: refueling with hydrogen is just as fast as filling up a truck or bus with diesel, while batteries can get too heavy when scaled up for larger vehicles.

Ballard believes it has around a 70% to 80% market share of the 3,000 fuel-cell buses and trucks currently deployed globally. It’s focusing heavily on Europe where the cost of a fuel-cell bus has plunged to 375,000 euros ($417,000) from about 1 million euros in five years. MacEwen expects a quarter of key European cities to deploy fuel-cell buses by 2025.

The company’s stock price has also soared since a decision last year by China’s Weichai Power Co., a major diesel-engine maker, to buy a 20% stake in the company for $163 million, making it Ballard’s top shareholder. Robert Brown, an analyst at Lake Street Capital Markets in Minneapolis, called it a “blockbuster deal” that positions fuel-cell technology to further penetrate the world’s biggest vehicle market.

That market could boom with growing government support: vehicle manufacturers, gas suppliers, and other private-sector institutions have announced more than $17 billion in hydrogen fuel-cell investments as of June, Bloomberg New Energy Finance said in a report last month.

China plans to subsidize the large-scale deployment of hydrogen cars and invest in refueling infrastructure, seeking to replicate the cost reductions and economies of scale that have made the country the biggest market for electric vehicles, according to the BNEF report.

Ballard’s success in China is a bright spot at a time of dimming business prospects for Canadian companies in China. Canada-China relations have frayed since Canada’s arrest on a U.S. extradition request of Huawei Technologies Co.’s chief financial officer. Huawei has been at the center of U.S. concerns about Chinese intellectual property theft and national security risks.

Ballard itself has seen would-be Chinese competitors trying to reverse engineer its fuel-cell technology, MacEwen says. “I personally have seen a facility in China that looked very similar to ours.”

So far the Chinese firms have only been able to make the technology work for a short period of time, he says. Ballard has buses in the field that have been operating for 35,000 hours -- in contrast, the typical hydrogen fuel-cell powered passenger car is designed for just 5,000 hours of durability.

The company has kept control in Canada of its core technology -- the membrane electrode assembly known as the heart of a fuel cell.

“We’ve invested over $1 billion in our core intellectual property and so it’s going to take someone a significant investment and a significant period of time in order to get to where we are today,” he says. “By that time, of course, we’ve moved the yardsticks on our technology.”

Still, skepticism over the technology remains, not least for the pumping infrastructure that would be required to build out the industry.

At the end of 2018, there were only about 10,000 passenger fuel cell vehicles on the road globally, according to BNEF, which doesn’t expect the technology to gain any significant share of the passenger fleet over the next two decades. It does see a growing role for fuel cells in the long-haul, heavy-duty trucking area that Ballard focuses on, but says scaling up the required infrastructure and bringing down the cost of clean hydrogen production will mean that progress is slow.

Tesla Inc. founder Elon Musk has said hydrogen’s shortcomings make it a dead-end for vehicles. “Fuel cells should be renamed ‘fool cells,’ he said in 2013.

Ballard has already been on a long road of unfulfilled potential. The company traces its roots back to 1979. During the tech boom in 2000 its shares approached C$200 but it’s never posted a profit. Analysts don’t expect to see net income until 2022, according to data compiled by Bloomberg.

Roth Capital Partners, based in Newport Beach, California, rates the company a sell. “The valuation in the stock has separated from the fundamental outlook, passing the highest peak made in the past 18 years, and does not seem to factor any risks related to business in China,“ Roth analyst Craig Irwin said in a recent report.