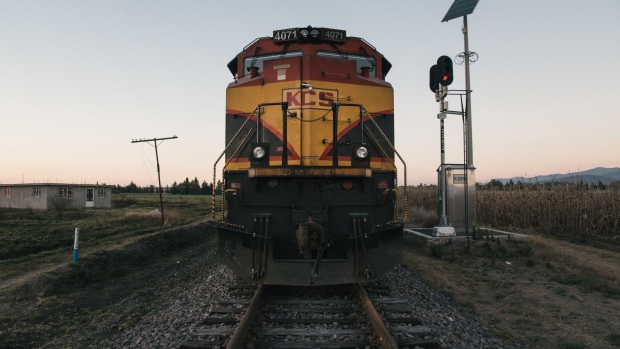 A Kansas City Southern freight train is halted by a teachers' union strike near the town of Maravatio, Michoac state, Mexico, on Tuesday, Jan. 29, 2019. , Bloomberg

Kansas City Southern shares were already on a tear last week following news of a possible acquisition when a Spanish website reported that private equity firms would buy the railroad operator for a higher sum. But as the stock jumped again, some analysts questioned the site’s legitimacy.

The shares had surged following a July 31 Wall Street Journal report that Blackstone Group Inc.’s infrastructure unit and Global Infrastructure Partners were weighing a takeover bid at a suggested deal value of US$21 billion, a figure corroborated by Bloomberg. But a dispatch last Thursday from a website called El Negocio said Blackstone and a partner were preparing a bid that raised the implied value by US$3 billion.

That sent the stock to a record, with Kansas City Southern closing the session among the 15 biggest gainers on the S&P 500. The next day, the article disappeared.

“While we never comment on deal speculation, this appears to be a fake news website,” Blackstone spokeswoman Paula Chirhart said Wednesday. “We’ve never heard of this organization and they did not contact us ahead of publication.”

When a Bloomberg reporter called the phone number listed on El Negocio’s website, a man who said his name was Albert answered and asked the reporter to call back in an hour. Later calls were not answered or returned.

El Negocio has a Twitter account that has not been verified, which is uncommon for a news service. Its Facebook page lists its location on a well-known street in Madrid, Calle Velazquez, with no address, and the link sends users to a Google maps page giving directions between the cities of Madrid and Cordoba. The phone number on the website is also associated with two other sites that seem to publish public relations statements from a website called Comunicae.

Analysts immediately started raising questions about the basis for the Spanish website’s report on the supposed US$24 billion bid.

“We’re not really sure what to make of this,” Credit Suisse analyst Allison Landry said in a report last week. “What we are struggling with is why a Spain-based media outlet is reporting on this; it would make more sense to us if it were a Latin American news source.”

Shares of the railroad operator have climbed about 20 per cent since the Wall Street Journal report, trading for US$187.01 at 10:42 a.m. in New York, though they haven’t retouched last week’s intraday record of US$195.47.

The incident shows how quickly even unsubstantiated news can create wild price swings. That’s especially true with volatility at levels not seen for several years as the Covid-19 crisis roils markets.

The rail operator’s business has improved with the help of so-called precision-scheduled railroading, hauling grain and other wares from the U.S. corn belt to Lázaro Cárdenas, a port city in Mexico. That partly explains why Kansas City Southern was seen fetching a slightly higher multiple than other recent railroad acquisitions, he said.

Absent a deal, there would be little upside to Kansas City Southern’s shares, based on expectations of “a lackluster freight market” for the rest of the year, Stifel analyst David Ross said in a report early last week.