The founder of software company Lightspeed POS Inc. has made it easy to check progress in his mission to create Canada’s next great technology company.

Beneath the vaulted ceilings of a converted rail hotel in Montreal, Dax Dasilva has hung screens showing minute-by-minute information on everything from website views to new customers.

The fixation on data has led to one of North America’s most successful initial public offerings this year. Now the pressure is on for Dasilva to keep the momentum going. That’s no easy feat when you have shareholders with different priorities.

The company, whose point of sale software helps small businesses manage things like inventory and online transactions, is addressing “both sides of the coin,” he said. Spotting when data trends in the wrong direction is part of the strategy. 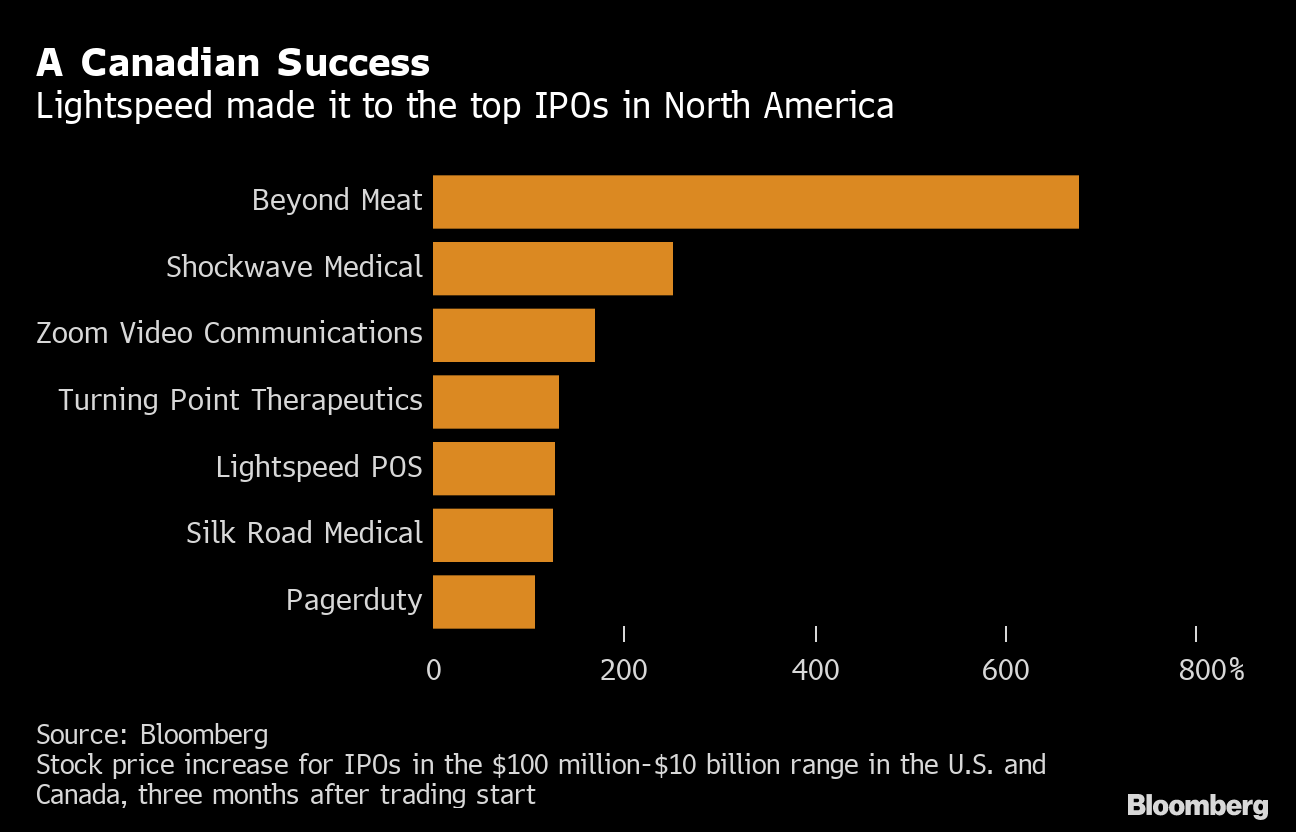 Investors are banking on Lightspeed’s ability to sign up thousands of new clients among retailers and restaurants, a market the company says is worth US$113 billion. The stock has doubled since the March IPO, propelling the company’s enterprise value as a share of projected sales -- a closely watched ratio in the industry -- above that of peers including payment-based Square Inc. and web development platform Wix.com.

The road has gotten bumpier of late. Shares have lost about a third of their value since reaching a record on Aug. 9, partly due to investors’ shift from growth to value stocks this month. They also fell in August, when Dasilva, pension fund Caisse de Depot et Placement du Quebec, and venture capital firm Inovia Capital jointly trimmed their stakes after IPO-related restrictions lifted.

The top shareholders say they’re in for the long run, supporting Dasilva as he tries to emulate the success of Shopify Inc., the US$36 billion e-commerce juggernaut and Canada’s tech pride. The two companies once had a partnership and now offer some competing services, though transactions at Lightspeed’s clients tend to be bigger.

Lightspeed’s market value of $2.7 billion is still less than a one-tenth the size of Shopify, as is its revenue.

“A lot of large institutions missed Shopify, so they see Lightspeed as the second entrant into the marketplace,” said Thomas Birch, who oversees private equity venture capital funds and technology investments in Quebec for the Caisse, which owns about 31 per cent. “They’re prepared to potentially pay a premium today because they know that Lightspeed is going to grow incessantly over the next five years.”

The company, which derives most of its revenue from clients’ monthly payments for its cloud-based technology, is predicting sales will jump as much as 48 per cent this fiscal year. That’s up from 36 per cent last year, as it expands its foothold overseas and adds payment processing to its offerings.

Dasilva has no official target date for turning a profit, though he’s made progress on the growth front. The company bought two smaller rivals this year, bringing acquisitions to seven since its 2005 inception and gaining customers in Europe and the golf course industry.

About half of its global workforce of 800 people works at the castle-like headquarters, where exposed brick and giant wooden beams frame artwork, sleek chairs and counters. Dasilva took art history and religious studies in college after dropping out as a computer science major.

With Lightspeed’s roughly US$190 million in cash on hand at the end of last quarter, the Vancouver native is eyeing more acquisitions. He’s also boosting spending on marketing and ads to get the attention of entrepreneurs in the early stages of setting up a business.

He can draw from an experienced board, including Chairman Patrick Pichette, a general partner at Inovia, who oversaw dozens of acquisitions as Google’s former chief financial officer.

There’s room to grow. Lightspeed has about 0.1 per cent of the addressable market of 47 million small and medium businesses and restaurants worldwide.

Bruce Campbell of StoneCastle Investments gives his outlook for shares of Lightspeed.

The retail industry is moving away from stationary checkout terminals and on-location servers to modern point of sale systems like Lightspeed’s that are cheaper, web-based, and can be used on mobile devices. They can also offer tools and data and integrate online sales. The industry is growing at twice the pace of the legacy system and will surpass it in size by 2027-28, according to U.S. research firm Global Market Insights.

Etiket, a beauty store and spa in Montreal which also sells niche fragrances and skin care products online, signed up for Lightspeed’s accounting, e-commerce and analytics on top of the basic point of sale package. It may add payments next, when the service becomes available in Canada.

“It’s integrated and that’s one less problem,” Etiket co-owner Simon Tooley said. The trade off is you have “all your eggs in one basket” if something goes wrong, he said.

Payments is new territory for Lightspeed and investors are watching how fast businesses embrace the service, which collects a percentage of every transaction. In the U.S., where Lightspeed introduced the option about eight months ago, almost half of new retail clients subscribed in the most recent quarter.

Now the company needs to show it can deploy the service worldwide and weather competition from deep-pocketed payment processors, according to a note by Raymond James analyst Steven Li.

“Going public was about building reputation and visibility, and having the capacity to grow--not about just giving liquidity to investors,” Inovia co-founder Chris Arsenault said. “Canada is very young in terms of building huge companies in our own backyard. We’ve lagged and now we’re just starting to catch up.”

Dasilva, the son of Ugandan immigrants of Goan descent, provides another inspiration for Canada’s entrepreneurs, following Ottawa-based Shopify’s 1,750 per cent growth since its 2015 trading debut.

One of the few openly gay CEOs in Canada, Dasilva is also an atypical figure in tech who set up a cultural center in Montreal and recently released a book infused with spirituality.

“They blazed the trail; we have as well,” Dasilva said of Shopify. “I talk to more tech companies in Canada that are thinking bigger as a result.”

--With assistance from Divya Balji and Doug Alexander