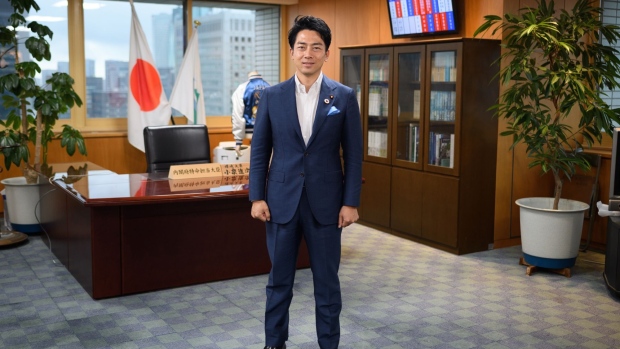 Pivoting from his efforts to limit Japan’s support for coal power overseas, the nation’s popular environment minister is turning his attention toward strengthening its international climate change commitments.

The minister, Shinjiro Koizumi, said in an interview that he wants Japan, the world’s fifth-biggest emitter, to aim for deeper cuts as part of its participation in the 2015 Paris Agreement. The nation has kept its emission goals unchanged since that year amid continued reliance on fossil fuels, partly due to public resistance to nuclear power after the 2011 Fukushima disaster.

“Japan’s energy policy, stuck in deadlock, is finally beginning to move forward,” Koizumi said. ”Our next step is to revise the climate policy and the basic energy plan.”

Koizumi is aiming to show Japan can lead the way on environmental issues leading up to the so-called COP26 meetings next year in Glasgow, the world’s most important annual climate gathering. Nations have been urged to update their plans to cut greenhouse gas emissions, after targets under the 2015 agreement were deemed insufficient to slow global warming.

Under its current Paris commitments, Japan is aiming for 2030 emissions to be 26% below 2013 levels. Any new target proposed by Koizumi, which he declined to detail, would need to be approved by the cabinet.

If the results of his latest cabinet-level, climate-friendly efforts are any guide, Koizumi will have a challenge ahead. His high-profile effort this year to tighten Japan’s controversial support for overseas coal plants was criticized by activists as a disappointment. The four-month review of the policy, which he called for, ended last week with some new restrictions and requirements for recipient countries.

The new guidance “shows no clear policy direction to rule out public financing of coal power,” Greenpeace Japan said in a statement. “The government has chosen to take no responsibility for the consequences of its policies, and to keep repeating the myth of efficient coal technologies.”

But Koizumi said the revision was the beginning of change to Japan’s coal-fired power generation policy and overall energy strategy.

A panel with the country’s Ministry of Economy, Trade and Industry earlier this month proposed that a review of Japan’s basic energy plan, including long-term power mix targets, should start next year and have a focus on decarbonization. METI, as the powerful ministry is known, has supported the nation’s coal power industry and offered stiff resistance to his efforts to end exports of the technology.

Coal generated 32% of Japanese electricity in the year ended in March 2019, with natural gas at 38% and nuclear at 6.2%. Renewables accounted for 17%. Under the current energy plan, Japan aims to reduce coal’s ratio to 26% by 2030 and gas to 27%, while boosting reliance on renewable and nuclear generation.