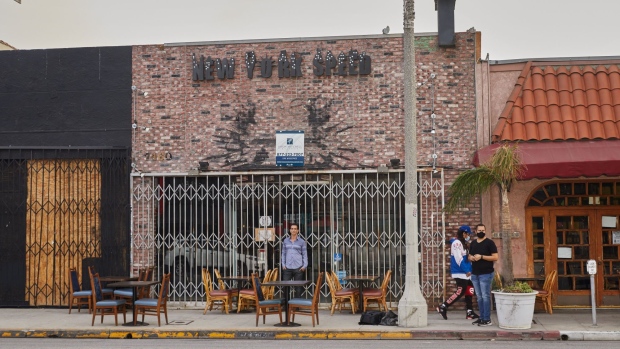 Barak Govani made a big bet on Amazon.com Inc. earlier this year that he now regrets. He shuttered his New York Speed clothing store on Los Angeles’s storied Melrose Avenue, packed up US$1.5 million in inventory and shipped it to Amazon warehouses around the country, putting his fate in the hands of a company that has routinely presented itself to the world as a friend of small business.

Today, the 41-year-old retail veteran is broke and couch surfs between his mother’s home and his sister’s place. Govani hopes to start anew by getting Amazon to pay him for inventory the company destroyed after suggesting his products could be fake—an accusation Govani strenuously denies.  His lawyer in September sent a demand for US$800,000—along with invoices to verify his merchandise came directly from fashion brands—and they’re waiting for Amazon’s response.

Amazon has become the world’s largest e-commerce company in large part thanks to the millions of third-party merchants who have chosen to set up shop on its sprawling marketplace. Small- and medium-size businesses are responsible for more than half of the goods the company sells to customers around the world—moving 3.4 billion products alone in the year ending May 31. The average small business has annual sales of US$160,000 on Amazon, up about 60 per cent from the previous year.

In blogs and press releases, Amazon highlights the success of these merchants as a win-win—for them and itself. Lost in the public-relations glare are merchants like Govani.

Stories like his have swirled for years in online merchant forums and conferences. Amazon can suspend sellers at any time for any reason, cutting off their livelihoods and freezing their money for weeks or months. The merchants must navigate a largely automated, guilty-until-proven-innocent process where Amazon serves as judge and jury. Their emails and calls can go unanswered, or Amazon’s replies are incomprehensible, making sellers suspect they’re at the mercy of algorithms with little human oversight.

Recourse is limited because when merchants set up shop on Amazon, they waive their right to a day in court by agreeing to binding arbitration to resolve any disputes. Amazon doesn’t negotiate terms with merchants. The boiler plate agreement is take-it-or-leave-it, a telling reminder of who has the upper hand in the relationship.

How Amazon treats third-party sellers is at the heart of a recent House Judiciary Committee report concluding that big technology companies often abuse their power over smaller partners. The committee’s recommendations include providing adequate recourse to sellers and eliminating forced arbitration clauses from contracts that deprives them from filing a lawsuit.

“Because of the severe financial repercussions associated with suspension or delisting, many Amazon third-party sellers live in fear of the company,” the report states. “This is because Amazon’s internal dispute resolution system is characterized by uncertainty, unresponsiveness and opaque decision-making processes.”

In an emailed statement, an Amazon spokeswoman said the company works hard to ensure products sold on its site are authentic and provides a fair dispute resolution process.

Govani has been selling clothes for more than 20 years, mostly brands like Hugo Boss, Calvin Klein and Lucky. About a decade ago, he began supplementing his store sales by putting merchandise on web marketplaces including Amazon and EBay Inc. Amazon emerged as the most effective partner, accounting for more than 90 per cent of his online sales.

Initially, Govani stored, packed and shipped all the orders himself, paying the company a commission on each sale. Amazon representatives suggested he try Fulfillment by Amazon, a service that handles that for additional fees. Govani decided to send all of his inventory to Amazon, becoming one of 450,000 businesses to try the service in the year ending May 31.

Govani’s problems began soon afterward. In April, Amazon emailed him to say his account was being reviewed based on four customer complaints over “inauthentic” products.

“In order to ensure that customers can shop with confidence on Amazon, we take ‘inauthentic’ complaints seriously,” the message said. “The sale of counterfeit products on Amazon is strictly prohibited.”

One complainant from San Rafael, California, was unhappy with the fit of a US$125 Lucky Moto jacket and said she was “wondering if this was a fake.” Govani refunded her money and explained that jackets made with different materials fit differently.

Another shopper was upset that his Calvin Klein underpants arrived in a damaged carton. “Box is pretty much broken, the item is a knock off,” the shopper said in a product review. It’s not clear why Amazon characterized the other two complaints—about apparel wrapped in tissue paper and shipped in envelopes—as “inauthentic.”

Govani appealed the suspension and submitted invoices from the brands to Amazon. His invoices were more than a year old because that’s when he had purchased the inventory, but Amazon wanted invoices from the previous 365 days. Govani was notified that his inventory would be destroyed if he didn’t reclaim it by mid-July. Merchants must pay Amazon additional fees for inventory removal.

Hoping to have his account reinstated and continue selling on the site, Govani put off the decision. He was equal parts encouraged and confused by subsequent messages from Amazon saying his inventory was scheduled to be destroyed later in July and then in early August then in late August. He received a total of 11 emails from Amazon each giving him different dates at which time his inventory would be destroyed if he hadn’t removed it. He sought clarity from Amazon about the conflicting dates. When he tried to submit an inventory removal order through Amazon’s web portal, it wouldn’t let him.

The spokeswoman said Amazon repeatedly asked Govani to provide evidence that the products sold were authentic but that the invoices he sent were either illegible or didn’t match the records of the brand owners. “After being unable to resolve the matter following several appeals as part of our dispute resolution process, we informed this seller six separate times that they needed to remove their inventory from our store by specific dates or it would be destroyed,” she said. “The seller failed to request to remove their inventory by the dates provided.”

At the end of July, Govani sent a panicked email to Chief Executive Officer Jeff Bezos—the world’s wealthiest man—with the subject line: “URGENT: Invalid Disposal of US$1.5 Million Worth of Inventory.” He exchanged emails with an Amazon representative named “Brigitte M.,” who promised to investigate.

“I haven’t been able to sleep for months now and I still do not know what Amazon is going to do that will determine my future,” Govani said in a final plea to Brigitte M. on July 31. “Amazon is in possession of my entire life’s hard work, closing my seller account with no valid reason that I understand and disposing of it! All of that without proper communication with me, not responding within a timely manner, responding without answering my questions or addressing the actual issue, being vague.”

Brigitte M. gave her final response on Aug. 3, reiterating that there was nothing else she could do. “I understand that you are disappointed with our previous response and we regret this inconvenience,” she wrote. “I’m sorry for any disappointment caused and appreciate your understanding. We won’t be able to comment further on this matter.

Amazon has been more aggressive in using algorithms to knock suspected counterfeits off the site, and consultants say Govani’s experience is common. Chris McCabe, a former Amazonian who now helps merchants navigate the appeal process, says suspensions based on complaints about inauthentic products are rising and often lodged by rival merchants looking to sabotage a competitor.

“Numerous sellers find themselves appealing this endlessly only to hear that their invoices aren’t acceptable or their suppliers aren’t verifiable, but without any indication as to why,” said McCabe, who testified before the House panel. “Or they receive no reply.”

If Amazon declines to reimburse Govani for his inventory, his next step is binding arbitration, which the House panel said gives Amazon the upper hand in disputes. From 2014 to 2019, only 163 Amazon merchants initiated arbitration proceedings against the company because “sellers are generally aware that the process is unfair and unlikely to result in a meaningful remedy,” the report states.

“Arbitration functions as a way for Amazon to keep disputes within its control, with the scales tipped heavily in its favor,” the report’s authors wrote. “As such, Amazon can withhold payments from sellers, suspend their accounts without cause, and engage in other abusive behavior without facing any legal consequences for its actions.”

Govani’s attorney Mario Simonyan, who has represented other Amazon sellers in similar disputes, suspects the company will make a low-ball offer, forcing Govani to decide if he wants to pay for arbitration, which can cost tens of thousands of dollars.

Govani said he is eager to start a new business in an entirely new field—possibly construction—even though he spent his career in retail.

“I don’t want to go back to online retail even though it’s the only thing I’m good at,” Govani said. “I’m so scared to sell on Amazon. This has been traumatizing.”