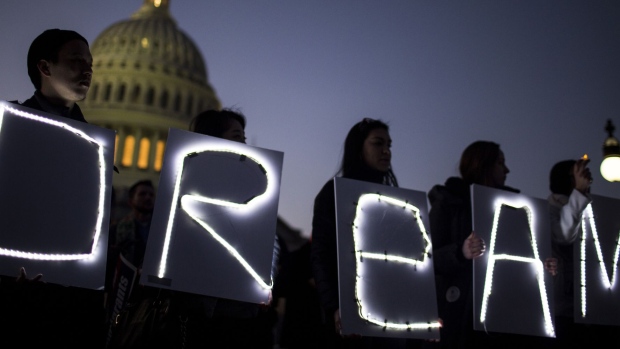 Demonstrators hold illuminated signs during a rally supporting the Deferred Action for Childhood Arrivals program (DACA), or the Dream Act, outside the U.S. Capitol building in Washington, D.C., U.S., on Thursday, Jan. 18, 2018. The House passed a spending bill Thursday to avoid a U.S. government shutdown, but Senate Democrats say they have the votes to block the measure in a bid to force Republicans and President Donald Trump to include protection for young immigrants. Photographer: Zach Gibson/Bloomberg , Photographer: Zach Gibson/Bloomberg

(Bloomberg) -- More than 600,000 immigrants brought into the US illegally as children face yet another restart in their long-running legal battle to decide if the program that keeps them from being kicked out of the country was created legally.

A federal appeals court on Wednesday ruled a challenge to the Deferred Action for Childhood Arrivals program, which protects certain young immigrants from deportation and provides them work permits, must go back for a new review by a lower court.

Critics claim then-President Barack Obama overstepped his authority when he created the program in 2012 out of frustration with Congressional inaction. The appeals court said DACA revisions made this year by President Joe Biden requires the states challenge the 2022 version of the program, albeit in front of the same Texas federal judge that ruled DACA unconstitutional in July 2021.

Although the ruling by the New Orleans court legally strips Dreamers of their ability to live and work in the only country most have ever known, the appellate judges blocked immigration officials from kicking anyone out until the US Supreme Court makes a final ruling on DACA’s fate. The judges said they wanted to avoid prematurely causing massive disruption in the lives of Dreamers and their families, employers and communities.

Biden said in a statement on Wednesday night that he was “disappointed” by the decision.

“While we will use the tools we have to allow Dreamers to live and work in the only country they know as home, it is long past time for Congress to pass permanent protections for Dreamers, including a pathway to citizenship,” Biden added.