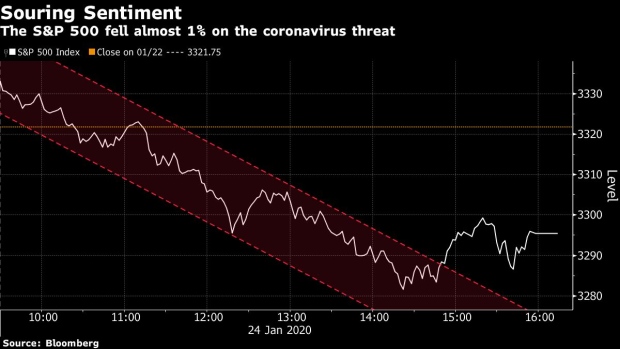 (Bloomberg) -- On a day rife with reasons for optimism, stock investors absorbed their sharpest blow since October as creeping nervousness around a virus outbreak finally provoked some serious selling.

The S&P 500 fell almost 1 percent, its biggest drop in nearly four months. The equity market’s “fear gauge,” the Cboe Volatility Index, climbed for a fourth straight session to the highest since Dec. 30.

Drowned out by reports on the coronavirus spreading were surprisingly strong earnings from Intel Corp., the semiconductor bellwether whose sales forecast allayed some of the anxiety around 2020 profits for technology companies. A reading on the U.S. services sector came in better than expected, extending a streak of positive economic data that has also spanned retail sales and housing starts over the past couple of weeks.

To be sure, Friday’s slump barely registers on stock charts going back more than a month. The S&P 500 remains up almost 14% since its last decline of this size in October, a gain that has pushed valuations to some of the highest levels of the bull market.

“The market suddenly realized that we’ve had a great run but there are a lot of risks that it has to account for,” Michael O’Rourke, JonesTrading’s chief market strategist, said by phone. “What we’re seeing is a reaction to news about a respiratory virus in China, but we also have a lot of uncertainties at home, and the market is priced for perfection. People want to lock in their gains and wait it out.”

An outbreak of a pneumonia-like illness started in the city of Wuhan in China and has spread to several countries in Asia and Europe, killing at least 26 people. In the U.S., health authorities are monitoring more than 60 people for potential infection. Three people in New York are being investigated for possible infection with the disease, according to Governor Andrew Cuomo’s office.

Losses in U.S stocks were broad, with 420 members of the S&P 500 trading in the red. Airline companies slid, with American Airlines Group Inc. and United Airlines Holdings among the biggest losers in the S&P 500, down more than 3%. Casino stocks got hit, too: Wynn Resorts Ltd. and Las Vegas Sands Corp dropped at least 2.3%. Utilities were the only sector that finished the session in the green.

Investors are cautious with stocks close to all-time highs as concern mounts that the respiratory virus develops into something worse, like the SARS illness that emerged 17 years ago. Friday’s decline came amid a broader concern about stocks’ valuations near multi-year highs and uncertainty around an earnings season that may show profits in S&P 500 companies dropped for a fourth quarter in a row.

With the S&P 500 up in 13 of 16 weeks, investors are locking in profits, said Chris Zaccarelli, chief investment officer of Independent Advisor Alliance. At the same time, the drop may become another buy-the-dip opportunity, should investors get the evidence that the virus outbreak is being contained, he said.

“If we were to get a full-blown pandemic over the next 6 months, and it’s much too early to believe that we will, then the damage to the S&P 500 could be 10-15%, but I think it’s unlikely to be as bad as that,” Zaccarelli said by email. “Even in the case of the SARS virus - and we don’t know if this new corona virus will do as much damage - the market bounced back relatively quickly.”

Next week will bring a batch of important earnings that may shift the attention from the virus outbreak. Megacaps from Apple Inc. to Amazon.com Inc. and Microsoft Corp. are expected to report their results.

The gauge pared its intraday loss of as much as 1.3% in the last hour, helped by a gain in Boeing Co. The stock added 1.7% as U.S. aviation regulators said the company is making progress in its work to fix the 737 Max.