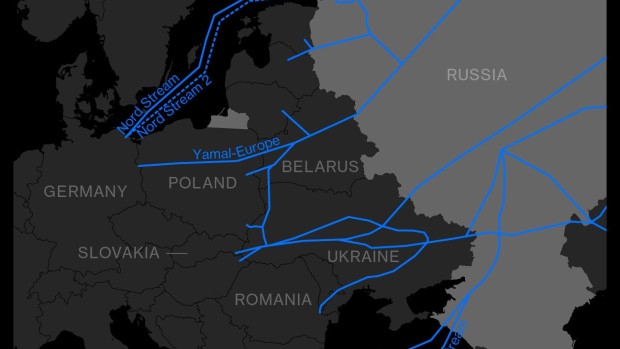 (Bloomberg) -- Russia’s energy conflict with Europe escalated dramatically as three pipelines were wrecked in suspected sabotage and Gazprom PJSC warned that the last remaining route to western Europe is at risk.

As the damaged pipelines left massive bubbling gas leaks in the Baltic Sea and Swedish seismologists reported two explosions, German and US officials said the incident looked like sabotage. Denmark and Norway moved to step up security around their energy assets and Germany said “critical infrastructure” had become a target.

While the pipelines were already out of action, the hit raises the stakes in the fight between Moscow and Ukraine’s allies, and makes it more likely Europe will have to survive this winter without any Russian gas at all.

Gas prices jumped on the suspected sabotage and rose further after Gazprom warned that the flows through Ukraine were also at risk because of a legal spat. If Ukraine flows are halted, western Europe would be cut off, leaving just the TurkStream pipeline sending gas to Turkey and small European neighbors still friendly with Russia.

“Given the events around Nord Stream 1 and 2 today, this would be an indication that Moscow intends to turn off all its gas supply to the EU, perhaps with the exemption of the little gas that still comes in via Turkey,” said Henning Gloystein, a director for energy, climate and resources at Eurasia Group in London.

There was no immediate comment from the Kremlin on the Ukraine transit issue. Earlier, asked about the Nord Stream damage, Kremlin spokesman Dmitry Peskov said it was premature to speculate before the results of an investigation.

NATO Secretary General Jens Stoltenberg said the alliance is monitoring the situation, and in close contact with the allies involved.

“This is something that is extremely important to get all the facts on the table and therefore this is something we’ll look closely into in the coming hours and days,” he said.

Russia has been squeezing energy supplies to Europe for months, engaging in a cat-and-mouse game as it tries to exert maximum pressure on Ukraine’s allies. The continent’s industry and economies are reeling from surging prices, and central bankers battling to tame inflation that’s creating a historic cost-of-living crisis.

Europe has responded to the gas squeeze by filling up storage and trying to source alternative supplies. For now, it looks like those efforts will be enough to get Europe through this winter, though questions remain over the next one. The bloc got about 40% of its pipeline gas from Russia before the war, a figure that now stands at about 9%.

Just a day after the Nord Stream damage first emerged, Gazprom said on Tuesday that a legal dispute over transit fees risks prompting Moscow to sanction Ukraine’s gas company Naftogaz. If that happened, then Gazprom would be unable to pay transit fees, the company said on Telegram, putting at risk flows.

“In practice, this will mean a ban on Gazprom from fulfilling obligations to sanctioned bodies under completed transactions, including financial transactions,” the company said.

“It looks like the developments on Nord Stream 1 and 2 were just a prelude to this latest development. If Russia cuts flows through Ukraine, the EU can’t even now consider a late U-turn,” said Tom Marzec-Manser, head of gas analytics at ICIS in London.

It’s not the first time there have been suggestions of foul play at energy sites since the war started. European leaders have accused Moscow of weaponizing energy flows for months, and of using maintenance and repair issues as pretexts for halting supplies. Last week, Russia said it had thwarted an attack on an oil and gas complex that supplies Europe and Turkey.

Back in July, Bloomberg reported that the Kremlin was likely to keep vital gas flows to Europe at minimal levels as long as the standoff over Ukraine continues, to ramp up pressure on the continent. European policy makers will now be calculating the cost of losing flows through Ukraine too -- and for the long-term.

“A winter recession because of high gas prices and potential shortages is already a given. But such a move by Moscow would signal the EU’s last doubters that Russia has no intention of improving energy relations with the EU again,” Gloystein said.