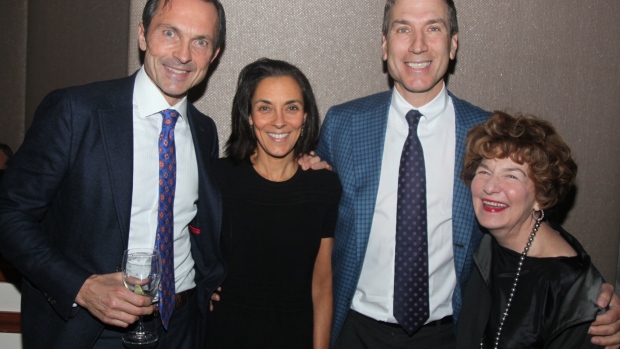 (Bloomberg) -- Ever wonder how Jeff Bezos’s kids spend their summers? One answer came Tuesday night at a gala for the Children’s Museum of Manhattan.

For one week each year, Jackie Bezos hosts her 11 grandchildren for what they call “Camp Marmee" -- so named because they’ve read Louisa May Alcott’s “Little Women" and equate her with the mother of Jo, Beth, Meg and Amy, she said in an interview. The novel’s Marmee makes sure her daughters are educated, and discourages them from marrying for money.

Camp Marmee takes place in Las Vegas. The kids do games, puzzles and challenges, like making a boat out of Styrofoam.

“It is wild and wonderful," Jackie Bezos said. “It is the best week of my year.”

The rest of the time, she “goes to work every day” at the Bezos Family Foundation, focusing on childhood development programs and research -- all with one big purpose.

“When you think about the possibilities of children’s needs being met, what we end up with is a better world," she said on stage during the gala. “We end up with people sitting around decision-making tables in the future who really have the ability to make decisions. So this is not a nice thing to have. This is a necessity."

A lot of people at the event agreed, including Paul Taubman of PJT Partners; Matt Messinger, chief executive officer of Trinity Place Holdings and co-chair of the museum’s board; and Michael Boublik of Morgan Stanley, also a museum board member. The benefit, held at the Lighthouse at Chelsea Piers, raised about $1.4 million.

“When you invest in little humans, they grow up to be good big humans," Boublik said.

At the Children’s Museum, Jackie Bezos has joined forces with Laurie Tisch, another power grandma and philanthropist and the organization’s founding chair. Created more than 30 years ago to help parents raise their kids, it offers programs and exhibitions on world cultures, the arts, science and health. These take place at the museum’s West 83rd Street home in Manhattan, in permanent mini-museums set up in shelters around New York City, and at Rikers Island when moms are reunited with their kids.

“CMOM totally gets it,” Bezos said, after receiving the Laurie M. Tisch Award from Tisch and Wes Moore, the CEO of Robin Hood Foundation.

The Bezos foundation helped fund the museum’s acquisition of a former church on West 96th Street, which will more than double its size once renovated. The foundation also established a research endowment and created an early childhood exhibition called “Superpowered Metropolis: An Early Learning City." It’s scheduled to open in previews at 83rd Street next fall, before moving into the new building.

Andrew Ackerman, the museum’s director, said he plans to incorporate the findings of neuroscientist Patricia Kuhl, who holds the Bezos Family Foundation Endowed Chair for Learning and Brain Science at the University of Washington.

Kuhl has learned a lot by putting babies in a $2.5 million machine called an Elekta Neuromag, made in Helsinki. “We’re the first in the world to apply it to babies," Kuhl said in an interview. “It’s perfectly safe and non-invasive and noiseless. It’s not clanking away, the babies can listen and look and do any number of problem solving things. It’s like a stethoscope for the brain."

What she’s learned is that “Machines don’t turn baby brains on," she said. "The brain thrives on social interaction." In one study, a 9-month-old exposed to a foreign language in a dozen sessions absorbed words, while the same information over a DVD produced nothing. “Social is the gateway to cognition."

“Jeff was my first child, he was born two weeks after my 17th birthday, so we kind of grew up together," she said. She didn’t have the benefit of the studies she’s funded, but she had good instincts. “I was playing with him, he was my playmate almost. It was very entertaining and I was amazed by it."

“He said at the time, the apple doesn’t fall far from the tree,” she said. “I was very proud."

To contact the reporter on this story: Amanda Gordon in New York at agordon01@bloomberg.net

To contact the editors responsible for this story: Pierre Paulden at ppaulden@bloomberg.net, Steven Crabill