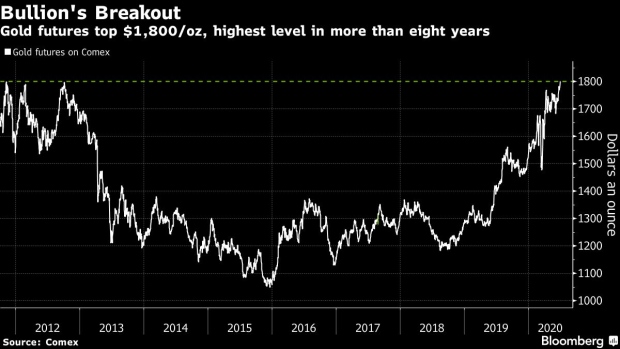 (Bloomberg) -- Fresh from cracking $1,800 an ounce, the global gold market wants to know what the Federal Reserve may do next to rescue the U.S. economy, with minutes due later on Wednesday that may shed light on the central bank’s willingness to embrace yield curve control.

Futures held near the highest in more than eight years, with a focus on the central bank release and warnings about the coronavirus pandemic. On Tuesday, Fed Chair Jerome Powell stressed that getting the virus under control was vital. Separately, infectious-disease expert Anthony Fauci said new U.S. cases of Covid-19 could hit 100,000 a day, up from about 40,000 at present.

Gold’s ascent in 2020 has been underpinned by aggressive central bank action to counter the pandemic’s economic fallout, with U.S. real interest rates already negative. The minutes of the Fed’s June 10 meeting may add detail on policy makers’ view on curve control, a strategy that involves using bond purchases to cap yields on certain maturities at a specific level.

“Yield curve control may be implemented in order to control or influence the yield and overall interest costs to the U.S. Treasury of future bond issuance,” according to Peter Grosskopf, chief executive officer at Sprott Inc. “This is becoming increasingly important as deficits skyrocket.”

Just over half of the economists surveyed by Bloomberg said they anticipate the Fed will eventually set target yields for certain maturities of Treasury securities., with most saying an announcement could come in September. Should curve control go global, it could spark a “buy everything” rally that ripples across credit, equities, gold and emerging markets.

Ahead of the minutes, bets that the Fed will implement curve control are showing up in the Treasury market. Among the signs, yields on five-year notes sank to a record low Tuesday.

To be sure, Sprott’s Grosskopf said control of yields may in effect already be here. With Treasury markets already so controlled by the Fed, market-based price discovery has been “crowded out” by U.S. central bank buying, he said .

“Bonds offer almost no real yield and have therefore become cash-parking assets,” said Grosskopf. “In this situation, gold becomes a much more attractive asset as a hedge to other markets and store of purchasing power.”