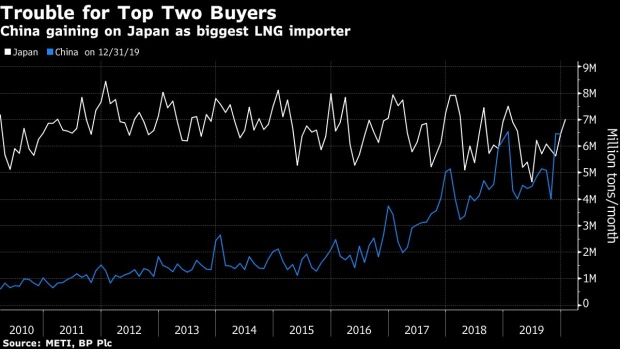 (Bloomberg) -- With liquefied natural gas prices reeling from the triple whammy of a mild winter, rising supply and China’s hobbled economy, Japan may be about to land another blow.

Electricity consumption, the biggest outlet for LNG in the world’s top importer of the fuel, is expected to drop after Prime Minister Shinzo Abe’s shock announcement urging schools to shut for about a month from March 2 in response to the spread of the coronavirus. While most factories remain open across the country, a growing number of offices are requiring staff to work from home for a few weeks.

Although the impact on demand remains uncertain, the virus woes come as Japanese buyers were already struggling with high inventory levels from a milder-than-normal winter. China and South Korea, the second- and third-biggest importers, are also grappling with the virus and brimming stockpiles, leaving few outlets to sell or swap cargoes.

“There will be downside risk, but it’s still early days,” Lucy Cullen, a Singapore-based analyst at Wood Mackenzie, said by email. “Power demand comprises nearly two-thirds of Japan’s LNG demand. For there to be a big impact on LNG in Japan, this will need to be a fall in electricity demand and in turn lower requirements for gas-fired power generation.”

The coronavirus shuttered China’s industrial sector last month, slashing demand for gas and leaving key LNG receiving terminals with little manpower, which helped send prices spiraling to historic lows. While China’s gas imports are showing signs of recovery, the virus has spread in Japan and South Korea, boosting fears that consumption of the super-chilled fuel could be curbed further even as global supply continues to rise.

Some Japanese importers last month had already begun studying how domestic consumption could be impacted by a spread of the virus in the nation, according to people with knowledge of the matter.

The Japan/Korea Marker, the spot Asian LNG benchmark published by S&P Global Platts, has dropped by about 50% in the past year and last month sank to a record low. Japanese LNG demand may drop more quickly than energy demand as a whole because of the fuel’s balancing role in the nation, according to Hiroshi Hashimoto, a Tokyo-based analyst at the Institute of Energy Economics, Japan.

“Electricity demand is expected to decrease by a few percentage points due to school closures and slowed corporate activities, which may be offset to some extent by increasing residential energy use as people are expected to stay home longer than usual,” he said.