The shortage of pipeline space that has hamstrung Canada’s oil producers for years may finally be over -- just not in the way they had hoped.

With that production likely slow to return and as many as three new conduits slated to be built in the next three years, the industry may have years of cheap, plentiful shipping capacity ahead.

That’s a significant turnabout for a country where, until COVID-19 hit, the lack of pipelines out of Western Canada was a central political and economic issue, often pitting the oil-rich province of Alberta against the government of Prime Minister Justin Trudeau.

But the pipeline relief came only because oil producers had to adapt to a dramatic drop in demand and low prices that are causing mounting financial losses. Some had spent heavily to ramp up their ability to ship crude by rail and now find themselves stuck with idled tanker cars and loading terminals.

The industry “achieved the dream of going long pipeline in Western Canada but for all the wrong reasons,” said Kevin Birn, IHS Markit’s director of North American crude oil markets.

Enbridge Inc., which typically has to ration space on its Mainline pipeline system, had spare capacity in recent months, a rare occurrence. Shipments of crude by train, the main alternative to pipelines, have plunged as well.

Until recently, the problem had been just the opposite. The lack of enough shipping capacity forced producers to sell their crude at wide discounts to benchmark U.S. prices, hurting Alberta’s economy. The industry accounts for about a 10th of Canada’s gross domestic product and a fifth of its exports.

Trudeau’s approach to the issue has varied. On one hand, he shelled out $4.5 billion (US$3.3 billion) to buy the Trans Mountain pipeline and save a key expansion from being scrapped.

On the other, he rejected Enbridge’s proposed Northern Gateway project and implemented regulations that industry groups have said will make it impossible to build new pipelines. Those moves contributed to Trudeau’s Liberal party losing all of its parliament seats from Alberta and Saskatchewan in an election last year.

But through all the turmoil, and many delays, three major pipeline projects are expected to enter service by the end of 2023: TC Energy Corp.’s Keystone XL, Enbridge’s expansion of its Line 3, and the Canadian government’s expansion of the Trans Mountain line.

The projects would add a combined 1.79 million barrels of daily shipping capacity out of Alberta, an almost 50% increase.

For now, with producers reducing output because of the pandemic, the current pipeline system should be able to handle flows, Birn said. Oil-sands companies will be slower to bring production back online until they have more certainty that a recovery is underway, bridging the gap until the new lines are running, he said.

“The need for the pipelines in the immediate term has been deferred or delayed because of the dramatic reduction in demand,” he said. “COVID-19 may have bought the industry some time.”

To be sure, those start dates are by no means certain. Line 3 already was stalled by a year because of permitting delays, and the project continues to face opposition in Minnesota. Keystone XL, after more than a decade since it was first proposed, is still facing legal challenges in Montana, and Trans Mountain also continues to face resistance from some indigenous communities in British Columbia.

In the meantime, some companies are stuck with investments in rail that they won’t need.

Cenovus Energy Inc., which suspended crude-by-rail shipments in March, had signed three-year deals in 2018 to transport 100,000 barrels of oil a day, and it also owns the Bruderheim rail-loading facility near Edmonton. Executives said on their first-quarter conference call that the idled crude-by-rail program costs them about $18 million a year, including the expense of storing unused rail cars.

Rail continues to be a part of the company’s “portfolio approach” to transporting its crude over the long-term, said Sonja Franklin, a Cenovus spokeswoman. The majority of the costs associated with the rail program are variable, she said.

Exxon Mobil Corp.’s Canadian unit, Imperial Oil Ltd., is in a joint venture on a rail terminal next to its Strathcona refinery in Edmonton. The roughly $170 million facility can load trains with 100 to 120 cars, for about 210,000 barrels of daily shipping capacity.

Imperial executives said on the company’s first-quarter earnings call in May that rail volumes for April had plummeted to 10,000 barrels a day, less than 5% of the facility’s capacity. 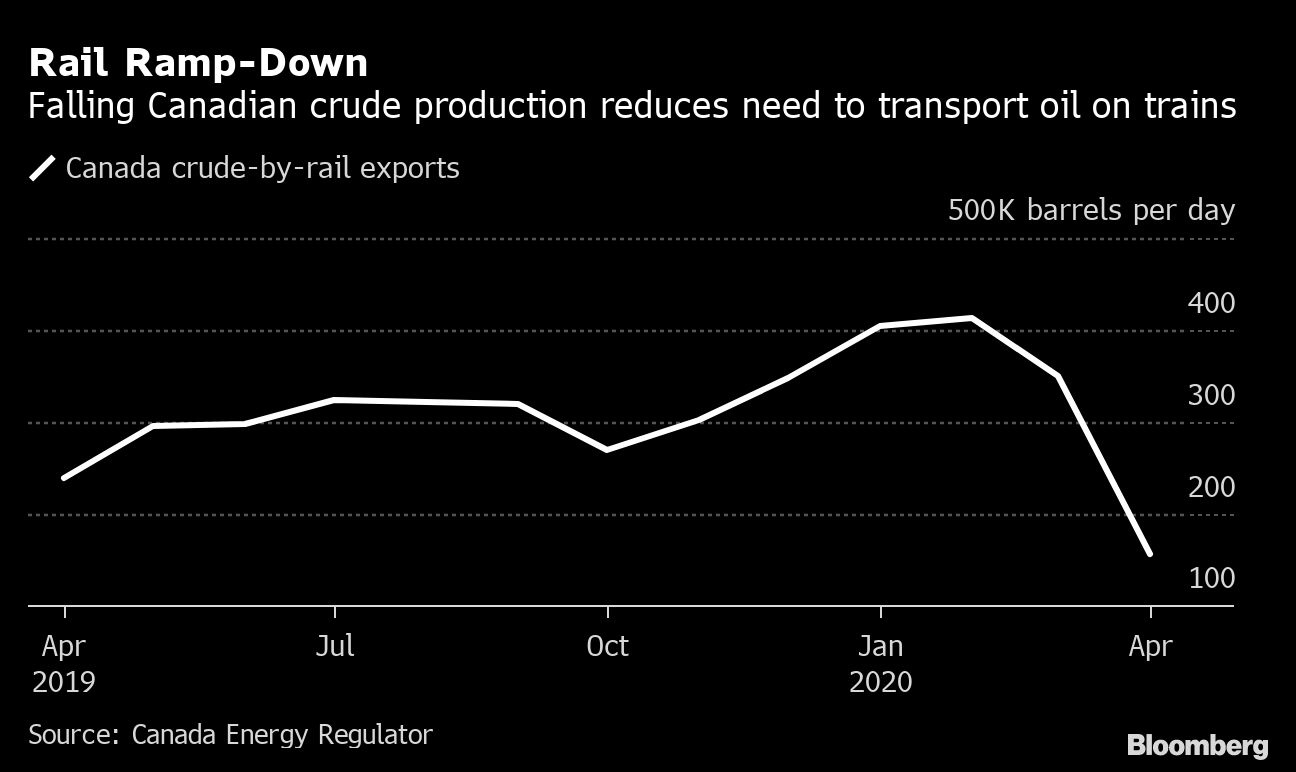 “We could be pretty much set for most of this decade unless there’s a breakthrough,” Valle said.