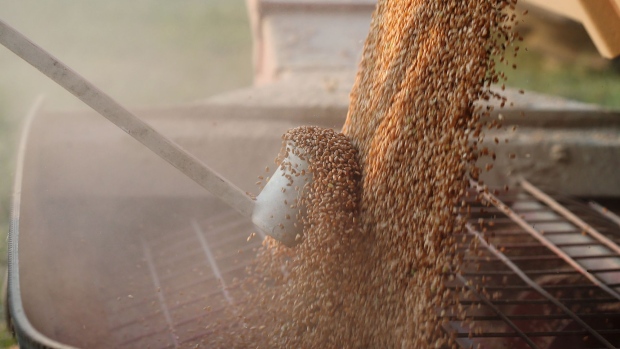 The cause and responsibility for the incident last Friday afternoon is not known and therefore it is unable to determine if any financial damage will result, the Winnipeg company said in a statement on Tuesday morning.

An investigation into the incident is continuing and there are no results to report as yet, said Fibreco president Megan Owen-Evans in an email on Wednesday.

“The grain silo involved is 115 feet (35 metres) high and has capacity for up to 3,500 metric tonnes of cargo,” she said, adding it was unloading red lentils for shipment at the time of the incident.

“For our customers and employees, we are doing everything we can to safely resume operations as quickly as possible.”

She said all similar silos have been taken out of service.

Fibreco said in a statement posted on its website on Saturday the bin collapsed due to a “structural failure” during loading. It said no one was injured.

The terminal company, owned by a consortium of forestry firms, announced in 2018 it would add bins and other equipment as part of a plan to replace the shipping of wood chips with agricultural products while continuing to export wood pellets.

Ag Growth, meanwhile, said in its statement the bin that collapsed is part of a new product line it developed for two commercial projects, adding 15 of the bins are located at Fibreco and an additional 20 have been manufactured for another customer but have not yet been commissioned.

It says it plans to investigate all bins in the product line.

CIBC analyst Jacob Bout pointed out in a note to investors that Ag Growth previously spent about $20 million on project rework at the same site due to a design flaw, although that's not believed to be related to the collapse.

“We have not updated our estimates at this point, given that it is difficult to estimate what (if any) the financial impact could be as the cause and any responsibility for the incident are not yet known,” he said.

“But clearly this issue is an overhang for AFN's share price.”