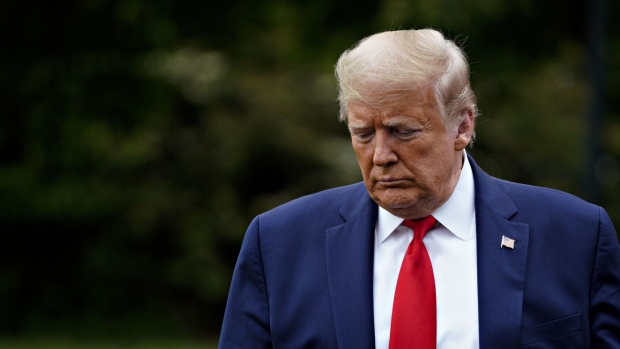 U.S. President Donald Trump walks on the South Lawn of the White House before boarding Marine One in Washington, D.C., U.S., on Thursday, May 14, 2020. Trump is visiting the factory of Owens and Minor, a medical equipment distributor, in Allentown, Pennsylvania. , Bloomberg

Classifying the material and reviewing the risks from their mishandling will be conducted in a way that “does not unduly interfere” with the Justice Department’s ongoing criminal investigation, Haines told Oversight and Reform Chairman Carolyn Maloney and Intelligence Committee Chairman Adam Schiff, in a letter dated Friday.

Maloney and Schiff had requested such a national security “damage assessment” on Aug. 13, after the FBI said it seized highly classified documents on Aug. 8 at Trump’s estate in Florida.

But since their initial request, the court-ordered public release on Friday of a heavily redacted FBI affidavit, which had been sealed, has revealed even more troubling details about the material stashed at the former president’s Mar-a-Lago estate.

“The DOJ affidavit, partially unsealed yesterday, affirms our grave concern that among the documents stored at Mar-a-Lago were those that could endanger human sources,” Maloney and Schiff said, in a joint statement Saturday. They called it “critical” that intelligence agencies “move swiftly to assess and, if necessary, to mitigate the damage done — a process that should proceed in parallel with DOJ’s criminal investigation.”

The 38-page FBI affidavit that was used to get a search warrant of Trump’s estate was unsealed Friday, but with heavy redactions. The filing of that document in federal court in West Palm Beach, Florida, came after a magistrate judge ruled the public should be allowed to see at least part of it due to the “historical interest” in the search for documents at Trump’s home.

The information included the description by an unnamed FBI agent of how the investigation into documents stored at Trump’s estate was prompted by the discovery of hundreds of pages of “highly classified” documents in 15 boxes recovered by the National Archives and Records Administration earlier this year, including 25 records marked “top secret.”

According to the affidavit, 14 of the 15 boxes recovered on Jan. 18 included classified documents, leading officials to conclude that the former president could possess additional such materials.

Various lawmakers, including Senate Intelligence Committee Chairman Mark Warner, Schiff and Maloney, have been seeking briefings and details on the substance of the documents from top US intelligence sources.

Warner also has received a letter from Haines, but a copy could not be immediately obtained.

On Friday, Warner said, “It appears, based on the affidavit unsealed this morning, that among the improperly handled documents at Mar-a-Lago were some of our most sensitive intelligence – which is one reason the Senate Intelligence Committee has requested, on a bipartisan basis, a damage assessment of any national security threat posed by the mishandling of this information.”